VS Battles Wiki
Register
Don't have an account?
Sign In
Advertisement
in: Tier 5, Tier 5-B, Tier 3,
and 34 more 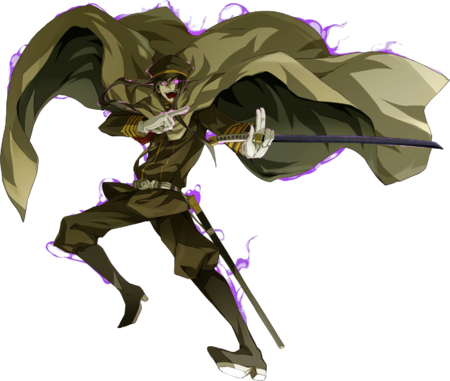 Powers and Abilities: Superhuman Physical Characteristics, Enhanced Senses (Has cross-dimensional senses, allowing him to sense even others who existed in another dimension and in a different time axis from his current position), Dream Manipulation, Master Swordsmen, Immortality (Types 1, 3, and 8. Can keep reviving himself so long as his willpower is intact and humanity show courage, reliant on the concept of Dreams), Regeneration (Low-Godly - Capable of maintaining his existence as long as his consciousness and will are still intact), Abstract Existence (Type 1: Superior to the Kantan who are stated to be nothing more than a dream, a fictional and metaphysical existence that reality cannot affect), Reality Warping (Can literally turn his dreams into reality to enhance his stats, create objects out of thin air and negate attacks), Self-Resurrection (Can resurrect himself if killed for as long as he wills it. Able to also to revive himself so long as humans possess/show courage, although he can still come back through his own will even if they don’t have it), Flight/Levitation, Barrier Generation, Durability Negation, Gravity Manipulation (Can cancel gravity to make his battleship float, can use gravity to attack and suppress his enemies with by amplifying it to 3000 times that of Earth’s), Statistics Amplification (Anmeizo Ima Deusu allows him to increase his strength every time there is a struggle against despair. Can also increase his stats through sheer force of will), Teleportation, Spatial Manipulation, Time Manipulation, Telepathy (Can access the thoughts, memories, and history of anyone with no time lag and without the affected knowing), Information Manipulation (Can read information from the past, present, and future of all mankind and from all universes), can banish people and material things into dreams, Existence Erasure (His Cancel Dream ability can permanently erase Tatari's, whose very existences rely on Alaya and who lack a concept of death) Causality Manipulation (Can ignore causality itself entirely and be able to do things like arrive to his destination before he had left his original spot), Pocket Reality Manipulation (Can create his own personal worlds including one that can exist outside of Alaya [Essentially a world outside of reality and Kanten]), Summoning (Can summon any God ever thought up by humanity, whether from myths and legends to even fiction itself. Can do this either by summoning their original God forms or their Tatari forms, shown in the form of Nakiri Kuubou and Shinno Akikage), Mind Manipulation (His summon, Crom Cruach, can instill in his opponents the desire to die by directly affecting the soul.), Death Manipulation (His summon, Balor, can cause anything to die, including those who are dreams, just by looking at it.), Matter Manipulation, Possesses unbelievable willpower (His will overpowered that of Alaya which, on top of being the source of all of existence, is the combined consciousness of all humans across all parallel universes, past, present, and future), Dimensional Travel (Can travel through time, different dimensions and universes, and even metaphysical spaces like dreams and memories themselves), Can keep on fighting even while unconscious, Can deal mental, spiritual, and conceptual damage, Resistance to Spiritual, Mental, Material, Spatial, Temporal, Existence Erasure (Everything he created, from the worlds with the World Creation, to the weaponry from the Material Creation are so powerful that not even Hiiragi Yoshiya, Rinko Gadou and even Harumitsu Oosugi whom previously erased Nakiri Kuubou can not affect him or his creations. Not even Amakasu himself could be erased by their abilities even when combined together), Information Analysis (Became an existence beyond Alaya's understanding to the point it could no longer gain any information) and Conceptual attacks

Attack Potency: Planet level (According to Masada, he can destroy the planet and be left with enough energy to keep on going afterward), Universe level with summons (He can summon gods stronger than Huanglong, who is in turn superior than his Tatari self, Nakiri Kuubou). Multiverse level with Ragnarok (Capable of summoning any God ever thought up by humanity and having them fight each other in a battle that would destroy all of existence, including every possible timeline. Senshinkan has confirmed the existence of parallel universes, with each universe being the manifestation of a future that a human desires, resulting in billions of alternate timelines.)

Speed: FTL (Stated by the narration to exceed the speed of light during his fight with Hiiragi), can amp his speed to reach Immeasurable (Amakasu can focus his willpower in order to amplify his speed to the point that he can arrive at his destination before he physically leaves his current position, which is beyond the limits of causality and linear time. Stated that he went beyond causality and time and has been shown fully capable of performing actions and reacting in this state)

Durability: Planet level (Regeneration, reality warping and the nature of his existence makes him extremely hard to kill)

Range: Tens of kilometers normally (Just his physical strikes can cause shockwaves reaching up to this range), Universal with Kantan Abilities. Multiversal with Ragnarok.

Intelligence: Extremely skilled combatant with 10,000 years of experience. Is a master of all Kantan Dream Abilities, being able to utilize all of its arts to it’s fullest (ex. He is able to instantly create complex and powerful weaponry such as Little Boy and Tsar Bomba, Japanese fighter jets, his battleship Ibuki, and even the “Rods of God” which normally require 10,000 processors). He is also able to calculate things such as the rotation-revolution of the planet and the trajectory of the moon and sun while using his attacks. Moreover, he can gain any information due to his connection with Alaya.

Weaknesses: Cutting off Amakasu’s connection to Alaya will prevent from using his abilities (as well as prevent Ragnarok from being completed).

Little Boy: A weapon used in the second world war. An instrument that carved a wound in the country of Japan. Superconductors at cryogenic temperature as well as electromagnets. Plasma at critical conditions. Lithium, Tritium, Deuterium. All of these components were made by Yoshiya and used to create a nuclear reactor holding down the immense heat emitted from the nuclear bomb, reducing 90% of its power. But even then it still contained enough energy to erase the chapel they were in instantly and throwing Yoshiya away from the battlefield through the shockwaves generated by it

Tsar Bomba: The Bomb Emperor. The biggest hydrogen bomb in history. It is a thousand of times stronger than Little Boy and Yoshiya stated that he couldn’t use the same method that he did against Little Boy for such weapon preferring to teleport it rather than seal it using Ayumi’s Kyudan to transport it outside of the atmosphere. However, its power is still great, that even if one were to send it to outer space, the shockwaves emanating from the explosion will still reach its target

Rods of God: Assembling tens of thousands of physical equations such as the planetary rotation and revolution. GPS Navigation, the trajectory of the sun and moon and the gravitational acceleration energy. The ultimate system of the Kinetic Energy Penetrator. Space weaponry releasing rods that target his opponents with great power coming from them due to the destructive kinetic energy of the projectile impacting at very high speed.

Anmeizo Ima Deusu (斯く在れかし――聖四文字): Kyudan type. The Four Holy Letters. The God of Christianity. God of Judgement and Trial. Imposing tests on his loved lambs to guide them through the right path. Story symbolizing Amakasu Masahiko. Do not give in. Stand up! Do not let despair swallow you. Muster your courage and resolution and I want to love that eternal radiance. Desire of Amakasu to see the courage in a person. Becoming the demon king so that many will oppose him, creating many trials in hopes of seeing that “brightness” in humanity. Effect of this Kyudan is the increase of Amakasu’s strength every time there’s a struggle against despair, with its range increasing with each passing moment.

Ragnarok (神々の黄昏): Tsuidan type. Strongest ability within Amakasu’s arsenal. Its effect like its name implies is reproducing the great war of gods in Norse Mythology. Creating a chaotic war between gods who are not bounded by their own personalities and nature. Since the roots of these gods are scattered throughout the entire world, they will appear everywhere, emitting a dome that destroys anything it covers, from the physical to the metaphysical such as souls, eventually expanding until the whole world is covered in it, resulting in total destruction. Moreover, this power extends to other parallel worlds due to it affecting Alaya itself, source of all existence. This dream ignores the setting of the original war, summoning myths not related to Ragnarok. Christianity, Islam, Hindu, Greece, Maya and all other high-ranked deities from their own legends into the conflict.

Some of the gods Amakasu summoned are:

Formoria――Crom Cruach (海原に住まう者――血塗れの三日月): An Irish God taking the form of a giant black dragon. Just the size of its jaw reminded Yoshiya of the event where the Moon gets swallowed by the Sun. Its roar differs from Nakiri Kuubou in the sense it held no physical effect but rather, it targets one’s will, instilling in them the desire to die and that there's no meaning to life, destroying them with the negative feelings that grow inside them, specifically targeting their soul until they surrender to its effect.

FormoriaーDemon Eye of Balor (フォーモリア――バロールの魔眼だよ): The King of the Fomorians. Its demon eye can bring death to anything. Not even Rosei, who are nothing but dreams, are immune to its effect.

Mahakala (大黒天摩訶迦羅): One of the gods close to the top in Ragnarok. As a God of both Creation and Destruction, his destructive power leads to the creation of a new world.