VS Battles Wiki
Register
Don't have an account?
Sign In
Advertisement
in: Characters, Blue Exorcist, Antagonists,
and 14 more 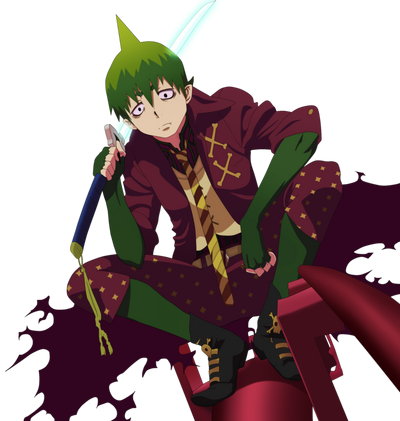 Amaimon is the seventh strongest of the Eight Demon Kings that rule over Gehenna and is one of Satan's sons. He holds the title, "King of Earth", and thus holds dominion over demons relating to it, such as goblins and greenmen.

Powers and Abilities: Superhuman Physical Characteristics, Immortality (Type 1), Regeneration (Low-Mid), Telepathy, Possession, Incorporeality (His true form is a conceptual existence that cannot interfere in Assiah, the human world, without a host, but cannot be destroyed by ordinary means), Can transform into a berserk, grotesque "true form", Has command over legions of demons related to the Earth

Speed: At least Supersonic (Easily caught up to Rin after punching him so hard that he broke the sound barrier)

Striking Strength: At least Town Class (Can cause small-scale earthquakes that leveled an amusement park with his casual physical blows)

Durability: At least Town level, likely higher (First-Class Exorcists and even Paladins have trouble dealing with him, and he has yet to truly show his full strength in the canon events of the series)

Stamina: High (As a Demon, Amaimon possesses stamina far exceeding humans, casually toying with Rin and is not inconvenienced by their battle in the slightest)

Standard Equipment: A pet hobgoblin called "Behemoth" that is powerful enough to challenge a First-Class Exorcist like Shura Kirigakure.

Intelligence: Despite his status as a Demon King, Amaimon is extremely absentminded, laid-back, and carefree. He is always focused on indulging in whatever strikes his fancy at the time, and rarely ever does more than try to destroy his opponents unless Mephisto tells him not to. Regardless, Amaimon is still a dangerous hand-to-hand combatant, toying with Rin in their battle and stealing his sword with ease. Regardless, his tendency to enjoy his fights can easily distract him, and his status as one of the most powerful demons in Gehenna has made him rather arrogant and easy to anger, blinding him to important objectives and making him extremely irrational when irritated.

Weaknesses: Amaimon is childish, arrogant, easy-to-anger, and absent-minded. He enjoys the feeling of a good fight and rarely takes things truly seriously. Amaimon must possess the body of a living organism to interact with Assiah (the human world) and use his powers there.