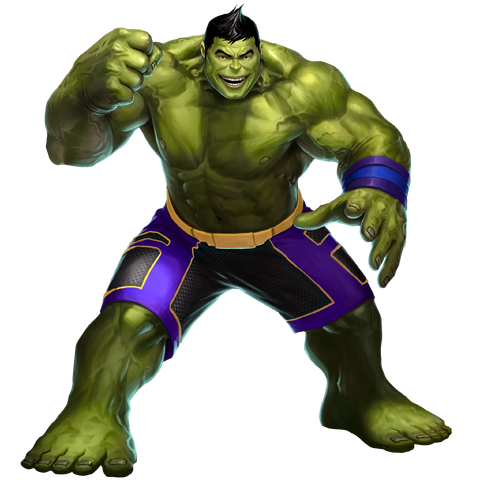 Mere minutes after achieving the highest score ever on the Excello Soap Company’s “Brain Fight” internet game, earning the title “Mastermind Excello,” 16-year-old Amadeus Cho was approached by a woman called Agent Sexton, representing an unidentified agency wishing to train him. Following his refusal, his Arizona home was blown up, killing his parents and sister, but Amadeus escaped, arriving in Jackalope, New Mexico the following morning. Contacting Sexton, he dismissed her claim that a second agency was responsible. Adopting an orphaned coyote pup, Amadeus confronted a helicopter sent by his enemies, deflecting the aim of one of the attacker’s gun to distract another attacker, whose misfired missile, whether by accident or design, struck bystander Bruce Banner, triggering his transformation into the Hulk. The Hulk quickly disabled the helicopter and took Amadeus and the pup to safety before departing, earning the boy’s undying devotion.

Attack Potency: Human level, Large Island level with Optional Equipment and Preparation (Possessed Hercules' Adamantium Mace, able to match Mjolnir) | Varies (His strength is dependent on his anger), Large Island level (Oneshot Devil Dinosaur, as well as a weakened Fin Fang Foom. Sent Xemnu flying and matched the Hulk) to at most Moon level (Threatened to destroy the moon, albeit with multiple hits)

Intelligence: Extraordinary Genius. He is considered to be the 7th smartest person on Marvel Earth, has a "hypermind" capable of performing an enormous amount of simultaneous calculations, can recognize patterns better than 99.999999993% of people on Earth, and is considered smarter than some gods and immortals. As a bestial Hulk, his intelligence is severely watered down.

Weaknesses: Performing complex calculations repeatedly overtime takes a heavy toll on his stamina. As the Hulk, Cho struggles with his own inner beast.