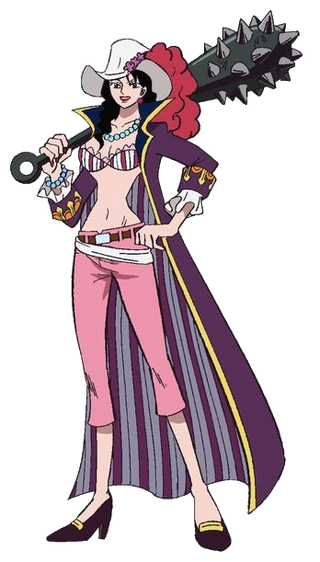 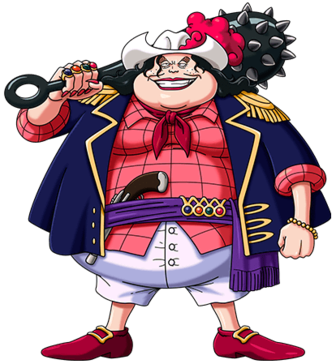 "Iron Mace" Alvida is the former captain of the Alvida Pirates and the first obstacle Luffy faces after setting sail for the first time. She is currently one of the two captains of the Buggy and Alvida Alliance.

Powers and Abilities: Superhuman Physical Characteristics, Expert Club Wielder and Competent Marksman, Passive Attack Reflection (Most attacks and all objects slide off her body), Body Control (Her skin has become supernaturally smooth, allowing her to glide along the ground as if she were skating and causing most physical attacks to simply slide off her), Social Influencing (After eating her Devil Fruit, she is considered so beautiful that most people, both male and female, fall in love with her at first sight. In combat, she uses this to make people drop their guard)

Attack Potency: Likely Large Building level+ (She is comparable to Buggy in power and is regarded as a superior by the likes of Cabaji. She threw her iron club as a boomerang so hard that it completely destroyed a wooden building.)

Lifting Strength: Likely Superhuman (Can wield her club without any sort of difficulty in both forms)

Durability: Likely Large Building level+, though physical attacks have a hard time hitting her, as they simply slide right off.

Range: Extended melee range, Meters with her iron club, Tens of meters when throwing her club and using it as a projectile.

Sube Sube no Mi (Smooth-Smooth Fruit): Paremecia Devil-Fruit. Alvida's main usage of this fruit's power is to allow attacks to slip off her, rendering her untouchable and immune to conventional damage. She can also use the slipperiness to reduce friction, allowing her to slide at considerable speed, given the right boost.

Retrieved from "https://vsbattles.fandom.com/wiki/Alvida?oldid=6516870"
Community content is available under CC-BY-SA unless otherwise noted.