VS Battles Wiki
Register
Don't have an account?
Sign In
Advertisement
in: Tier 9, Tier 9-A, Tier 8,
and 29 more 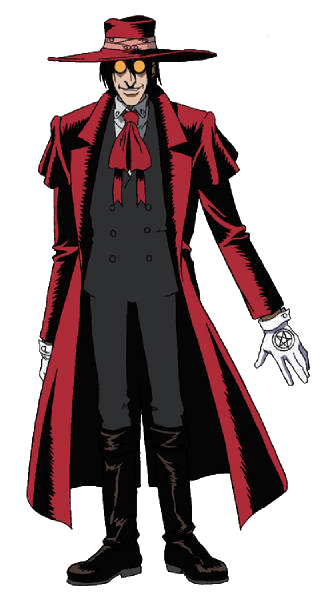 Alucard is an ancient vampire and is also known as Count Dracula (the same one as the original Bram Stoker's) and Vlad The Impaler (his original/human life). He serves the Hellsing Organization and is the most powerful vampire in Hellsing. By the end of the series, Alucard has only two lives/souls within him and in exchange for the vast number of lives he had and the ability to summon a vast quantity of souls as familiars for battle, he became pseudo-omnipresent with Schrödinger's powers.

Tier: 9-A, higher in level 1 and 0, 8-B with Telekinesis | Unknown, likely the same as before via a physical manifestation

Powers and Abilities: Superhuman Physical Characteristics, Enhanced Senses (Extends vision to allow Alucard a range of at least a kilometer with the Casull), Resistance to Illusion Creation and Mind Manipulation (Should be comparable to his servant Seras, who used her Third Eye to get out of Zora's illusion), Precognition, Limited Regeneration Negation with the Casull and Jackal (Can nullify Vampire regeneration due to the composition of its ammo), Familiar Summoning (Can summon undead familiars from the souls he absorbed to serve him, retaining all of the powers they used in life, like Tubalcain and Rip Van Winkle), Can turn virgins of the opposite sex into vampires, Regeneration (Low-High, can regenerate from bloody bits), Telekinesis, Telepathy, Mind Control (hypnotized a bell clerk and a special forces operator), Blood Absorption, Can devour the souls of others through their blood, Immortality (Types 1, 3 & 7), Intangibility, Levitation/Flight, Shapeshifting, Can control shadows, Illusion Creation, Immunity to all of the known vampire weaknesses | All the Abilities from before along with Incorporeality, Regeneration (Low-Godly, exists as long as he knows he exists, came back from the disappearance of his physical body after taking care of every single Soul he possessed), Teleportation

Attack Potency: Small Building level (Comparable to his servant, Seras Victoria as a completed Vampire), Higher in level 1 and 0 (Was able to easily kill Luke Valentine and Tubalcain Alhambra, who were able to easily outmatch his base state. Was able to rip out The Monster of God's heart), City Block level with telekinesis (Via this calc) | Unknown (Due to his nature, his capacity to deal out damage is hard to judge), likely the same as before via a physical manifestation

Speed: Hypersonic+ with High Hypersonic reactions (Reacted to Rip Van Winkle's bullets), Higher in Level 1 (Kept up with The Monster of God) and 0 | Unknown, likely the same as before via a physical manifestation

Lifting Strength: At least Class 10 (Lifted a super fast fighter jet while in a shadow-composed state with half of his body), Higher in Level 1 and 0, Class M with telekinesis (Via this calc) | Unknown, likely the same as before via a physical manifestation

Striking Strength: Small Building Class, Higher in Level 1 and 0 | Unknown, likely the same as before via a physical manifestation

Stamina: Limitless, can take on multiple opponents and strong characters in his verse in Level 0 and with restraints without ever exhibiting fatigue, in fact, Alucard was enjoying the battle. Has never tired at all in any of his fights.

Range: Standard melee range, Hundreds of meters to a few kilometers with his abilities | Universal

Intelligence: Gifted. Is a master fighter with centuries of combat experience and is very knowledgeable. He's cunning and is shown employing strategy on a couple of occasions to win the fight (which he does) instead of relying on brute power, such as when he used shadow duplicates to distract Tubalcain (who is also cunning and manipulative himself, having manipulated the local police into doing his bidding on the promise of immortality) in which he quickly bested him, and illusions mixed with Luke Valentine to trick Walter, through which Alucard was easily able to best him. Technically has the willpower and knowledge of millions of men. Was also an evil dictator once.

Weaknesses: Very holy objects such as blessed weaponry can still hamper him or greatly annoy him, could have lost most of his power due to killing all his familiars except Schrödinger. He cannot cross water by himself. He believes he should be slain in combat by a human, and may hold back and accept his fate if challenged by one - conversely, he is disgusted by enemies that attempt to leave their humanity behind, stating that only a man can kill a monster.

The Auditor (Madness Combat) The Auditor's Profile (The Auditor had The Halo, Pre-Schrödinger Alucard, and his Telekinesis was restricted. Speed Equalized)