VS Battles Wiki
Register
Don't have an account?
Sign In
Advertisement
in: Tier 2, Tier 2-C, Tier Low 2-C,
and 107 more 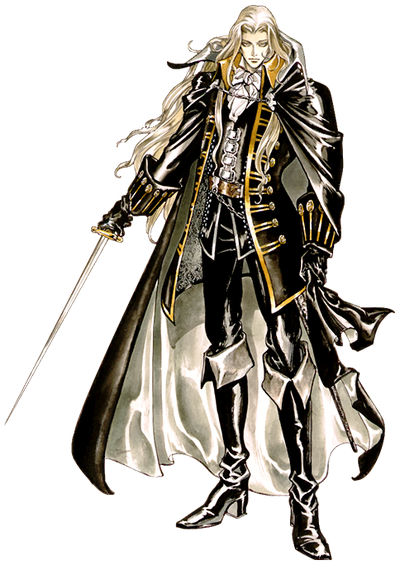 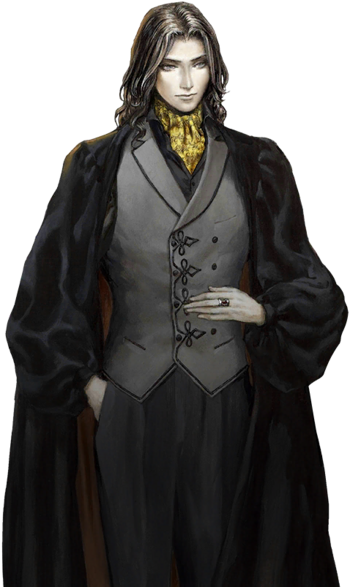 As the offspring of an unnatural bond between Dracula and a human woman named Lisa, Adrian is extraordinary, preordained to be stronger than any human, approaching his father's potential. After Lisa was murdered, mistaken for a witch, Adrian grew up under his father's influence. He was trained in dark arts, shaped into a warrior who would battle for the evil side one day.

Adrian's life did not come without quirks, as the gentle, human side of his mother always seemed to cloud his "better judgment," as Dracula would have put it. During Lisa's last breath, Adrian was by her side. She insisted that he would not seek vengeance on humans following her death since their lives are already full of hardship. With those words, she had a profound influence on Adrian's thinking. His mind wandered as he questioned his father's will. After standing by for as long as he could, he broke away from his father's army and disappeared.

Understanding that Dracula would impose his wrath on the people, Adrian would turn his efforts toward destroying his father's army, hopefully encouraging him to reconsider. Furthermore, he chose to go under the name "Alucard" — Dracula's name in reverse — to represent that he opposes his father's cause.

Attack Potency: Low Multiverse level (Is capable of defeating Dracula alongside Trevor Belmont, and is capable of destroying the Time Reaper, who threatened[65] to erase[66] all the[67] Castlevania timelines[68]) | Low Multiverse level (Is far stronger than before, Defeated SOTN Maria[7] and Richter,[7] who is[7] stated to[69] be the strongest vampire hunter[69] of his era,[7] as well as defeat Dracula in the same game[7]) | Universe level+ (Arikado is Alucard when his powers have been sealed away to prevent Dracula's resurrection, however he still is capable of controlling the entirety of the castle[15]), Low Multiverse level without the seal (Is capable of keeping up with Julius Belmont to fight Dark Lord Soma, the former is stated to be the most powerful vampire hunter ever, surpassing Richter as a result)

Range: Extended melee range normally, Low Multiversal with magic (Is capable of affecting Castlevania,[15] which is another world and can access the passage of time itself[71])

Standard Equipment: Alucard can technically use any weapon and item in Symphony of the Night, these are the more noteworthy items in his arsenal:

Intelligence: At least Genius (Alucard is a highly skilled combatant, being capable of effortlessly matching[7] numerous foes in combat[7] that are skilled in different[7] forms of combat[7] and even defeating his[57] own Doppleganger[7] on numerous occasions.[7] Is also an expert on magic, which requires one to understand Quantum Physics to utilize it to its fullest,[25] and is capable of running a top secret Japanese government agency as Genya Arikado.)

Weaknesses: Is somewhat vulnerable to running water, (though that can be countered with a snorkel-shaped Holy Relic) 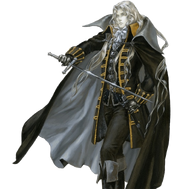 Alucard in Harmony of Despair 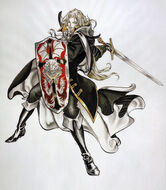 Alucard's Symphony of the Night portrait

Genya Arikado in Aria of Sorrow

Genya Arikado in Dawn of Sorrow 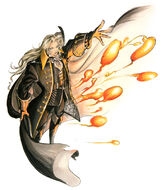 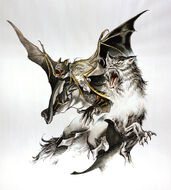