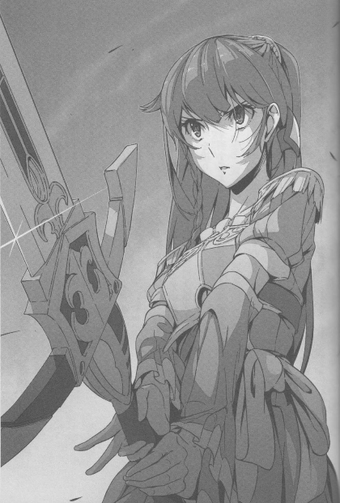 Marie Quatre Argentina de Belgaria, normally addressed as Altina, is the fourth child of the Emperor of Belgaria, and the titular character of the Altina the Sword Princess Light Novel series.

Being the daughter of one of the Emperor's concubines, who was a commoner, she wasn't well liked by the queen and the other princes, so she was sent to lead a regiment in the north. There she met Regis Auric, a strategist who she befriends.

Together, they achieve many glories in the battlefield, managing to defeat the High Britannian invasion, and making her be promoted to Généralissime, the commander of all the armies in the country, with less authority than only the Emperor himself.

While she commands those armies, her main goal is to become Empress and bring peace to her country and the surrounding nations, that have been in conflict with each other for generations.

Tier: 9-B, higher with her sword

Attack Potency: Wall level (Crushed a rock the size of a human head with one hand. Stated to be stronger than Bastian), higher with her sword (Can easily cut through boulders and destroy regular steel weapons. Can cut through people as durable as her)

Speed: Subsonic (Managed to deflect an arrow even with her gigantic sword. Can keep up with Baltasar, who can move faster than what the eye can see)

Lifting Strength: Class 5 (Stronger than Bastian, who can overpower bulls and carry cows around)

Intelligence: Gifted. While she's not book smart, she's a very good fighter, picking up swordsmanship faster than one of the best swordsmen in her country.

Weaknesses: While it makes her attacks way more powerful than normal, the size of her sword means that it's harder to move it around quickly or for too long before tiring.