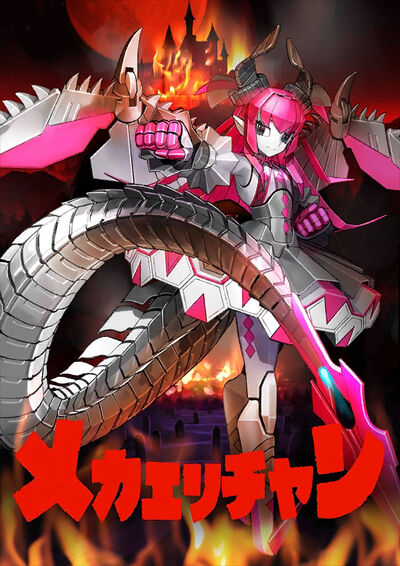 Alter Ego is an Alter Ego-class Servant created by Osakbehime during the Decisive Battle at Himeji Castle Singularity.

Alter Ego's True Name is Mecha Eli-chan, a robotic version of Elizabeth Bathory created to overtake the original and seize control of Csjete Castle for Osakebehime as part of the latter's scheme to remain a shut-in forever.

Age: Less than a year old (Prepared by Osakabehime in advance of Halloween)

Attack Potency: Island level (Possesses A-Rank Strength and battled Yan Qing, Penthesilea, and the original Elizabeth Bathory), Island level+ with Breast Zero Erzsébet (As a B-Rank Anti-Army Individual Noble Phantasm, it should be much stronger than her normal attacks.)

Speed: Massively Hypersonic (Kept up with Yan Qing, who has A+ Rank agility)

Durability: Island level (Possesses A-Rank Endurance and withstood attacks from Penthesilea, who has A+ Rank Strength)

Stamina: High (Servants can fight for an entire day without tiring and continue fighting for as long as they have a sufficient supply of mana)

Intelligence: Mecha Eli-chan was created to be "guardian deity" of Csjete Castle, ruling over it with efficiency and quickly taking over the knights Elizabeth created with the Holy Grail. In combat, she's armed with a wide range of ranged armaments that allowed her to easily bully her original out of the castle and face down Penthesilea, Queen of the Amazons, and Yan Qing. She is also notably well-read and savvy, being fully aware of Asimov's Three Laws of Robotics and circumventing them when Moriarty attempted to use them to avoid punishment.

Breast Zero Erzsébet: Soaring Metallic Demoness: Mecha Eli-chan locks all of her weapons and focuses them onto a single target. Such a barrage would be comparable to an Anti-Army Noble Phantasm, but she uses them as the ultimate "private live concert". She then finishes her opponent with a her Blast Voice, a torrent of compressed air and sound comparable to the force of Báthory Erzsébet despite lacking an amplifier for her voice.