VS Battles Wiki
Register
Don't have an account?
Sign In
in: Characters, Male Characters, Comic Book Characters,
and 14 more 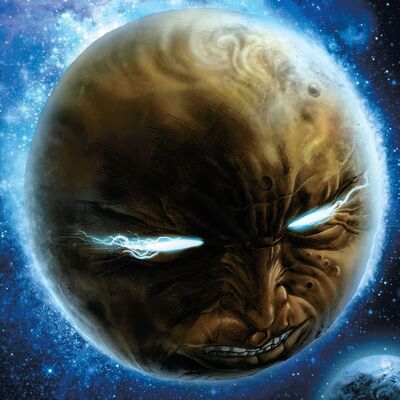 While on a mission to prevent Ego from causing more harm to the planet Earth's solar system, Thor was confronted by the Stranger who encouraged the thunder god not to interfere with Ego's destiny. Baffled by the Stranger's sudden interest in divinity, Thor questioned the man of science only to learn that the Stranger was Ego's creator, and he was streaking across space on a mission of great importance. Since the Stranger was unwilling to reveal exactly what this mission was, Thor hurried ahead of the "Living Planet" to find its destination. Thor quickly came upon the Museum of the Elder of the Universe known as the Collector. After a brief scrimmage between the two powerful men Collector revealed to Thor Alter Ego, another "Living Planet" was being held within a special chamber of the Museum. Also in the Museum was Zephyr, one time captive of the Collector, although now she is acting as his ally, and she blasted Thor into the Alter Ego's dimensional prison, where he became the living planet's next meal.

Powers and Abilities: Superhuman Physical Characteristics, Flight and Spaceflight, Large Size (Type 5), Immortality (Types 1 and 3), Absorption (Was absorbing part of Thor and Zephyr's energy), Body Control (Can freely control and manipulate every part of his body to create things such as wide scale supervolcanoes, mouths on different parts of his surface, and increasing the size of his mouth), Earth Manipulation (Caused the ground to swallow Thor), Matter Manipulation (Can manipulate his body in the same way Ego can)

Lifting Strength: Pre-Stellar (Should be comparable to Ego)

Durability: Solar System level (Tanked a Godblast to his core and was little worse for wear instead of being rendered comatose as Thor thought he would be)

Intelligence: Average (Due to being raised solely in isolation, Alter Ego is almost completely insane, though he is capable of some rational thought)