Alphonse Elric (アルフォンス・エルリック, Arufonsu Erurikku) is the younger brother of Edward Elric, the Fullmetal Alchemist, Al is also a victim of the failed Human Transmutation experiment in which Ed lost his right arm and left leg. Having had his entire physical being taken away from him in the aftermath of the tragedy, Alphonse exists solely as a soul alchemically bound to a large suit of steel armor. Now, Al travels with his brother in search of the legendary Philosopher's Stone, an item with the power to restore their bodies to normal.

Attack Potency: Wall level (Can spar with and defeat his brother). Large Building level with alchemy (His alchemy should be not that weaker than his brother), Town level with a Philosopher's Stone (Solf J. Kimblee was impressed by the power of the stone and clashed with Alphonse's Alchemy)

Speed: Supersonic+ (Should be not that slower than his brother)

Durability: Wall level (His armor can deflect bullets with impunity)

Intelligence: Studied with his older brother and is a master alchemist. Although technically not as smart as Ed, he is still quite intelligent.

Weaknesses: Al is a pacifist at heart, which makes him less aggressive in combat than his brother. If his Blood Rune is damaged, his soul will fade away from the armor.

Unlike Ed, Al is slower but is a heavier hitter. His fighting style is a lot like Ed's, but he doesn't use weapons as much as Ed does. He prefers hand to hand combat. 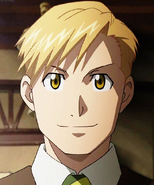 Alphonse's human appearance at the end of the series.
Add a photo to this gallery