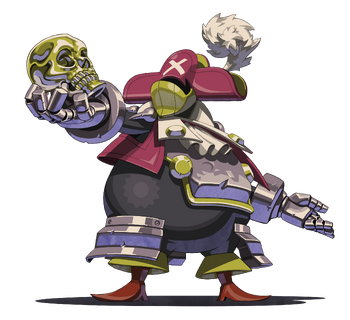 Alphonse is an automaton and a former sky pirate. After a quick skirmish with Otus and Geddy after attempting to steal Otus' Owl Cloak, he is abandoned by his shipmate, Dirk, and soon becomes friends with Otus. Despite his former occupation, he is, in fact, a very friendly person in general, and reveals that he was forced into becoming a pirate by Molstrom to protect his own life, but is now willing to help Otus prevent Molstrom from obtaining the Hex Relics and taking over the skies.

Attack Potency: Small Building level+ (Should be comparable to Otus, who can smash large rocks apart in two hits)

Speed: Subsonic (Should be comparable to Molstrom, who was able to throw an anchor at this speed)

Lifting Strength: Class 10 (Should be comparable to Otus, who can lift a bell that weighs this much)

Stamina: Limitless, being an automaton

Range: Tens of meters with his shotgun

Intelligence: At least Above Average

Weaknesses: He cannot fly, and typically relies on Otus for higher mobility. His shotgun typically requires him to get up close and personal with his enemies in order to hit them, and it has a fairly lengthy recharge time between shots