VS Battles Wiki
Register
Don't have an account?
Sign In
Advertisement
in: Tier 4, Tier 4-B, Characters,
and 37 more 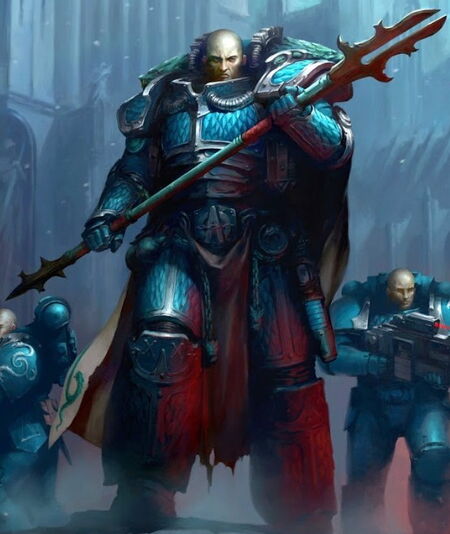 Alpharius Omegon, notable by other titles such as Aleph Null and Threefold Serpent, were a uniquely constructed pair who acted in unison as the Primarchs of the Alpha Legion. They were two of twenty genetically modified children, who at birth were placed on a random planet away from the God Emperor's gene lab by the Ruinous Powers. Among the sons of the Emperor, little to none of the origins of the twin Primarchs are known. This vagueness and mystery extends to the likes of their astartes legion with them proclaiming themselves to be their gene-father and even modifying their physical appearance to be more in line with that of their Primarchs.

They were possibly two of several Primarchs to betray the Imperium of Man following the events of the Horus Heresy, falling into the clutches of the Chaos Gods. Even after the treachery of the Warmaster their status was rather vague regarding whether they were truly aligned with the Archenemy. Some believe that they were loyalists deep in traitor ranks subverting Chaos' grand scheme, while others consider them to have aided in the crippling of the Imperium. In the climax of the Horus Heresy, the Imperial Fist's Rogal Dorn effectively slew his brother, with his twin Omegon solely claiming command of the legion. Such a demise is widely considered suspect by the members of the Ultramarines, with many believing the Primarch is still at large in the galaxy under the guise of another alias.

Age: Several hundred years as of "death", possibly far older if having survived

Powers and Abilities: Superhuman Physical Characteristics, Enhanced Senses, Immortality (Types 1 and 3, possibly 6 through switching bodies), Regeneration (Low-Mid), Invisibility with Cameleoline Cloak, Information Analysis (Can accurately analyze any chemical he eats/tastes and break them down if required), Limited Memory Manipulation (Can eat creatures/people and absorb part of their memories from their DNA/RNA), Weapon Mastery (Skilled in a wide variety of weaponry to an extent far greater than what could ever be achievable by regular human), Technology Manipulation (His skin can directly connect and interface with his armor, among several other pieces of Astartes equipment), Martial Arts (As a Primarch, the Alpharius is one of the best close-quarters fighters in the entire galaxy), Vehicular Mastery, Intangibility (Controllable, though only for his/their spear), Matter Manipulation (Via spear), Genius Intelligence, Stealth Mastery (As leader of the Alpha Legion, the most accomplished spies among all the Legions, Alpharius/Omegon are masters in stealth and infiltration, espionage and the like), Forcefield Creation (Via Iron Halo), Durability Negation, Teleportation via Dimensional Travel, Mind Manipulation, Soul Manipulation and Conceptual Manipulation (Primarchs are capable of attacking on every level of existence, mental, spiritual and even conceptual), Resistance to Magic, Telepathy, Aura, Conceptual Manipulation (Resistant to all the myriad of different attacks that can be made on him by the powers of the Warp, as well as most of the powers of other Primarchs), Mind Manipulation, Empathic Manipulation, Soul Manipulation, Spatial Manipulation, Time Manipulation, Matter Manipulation, Reality Warping, Existence Erasure, Disease Manipulation, Poison Manipulation (Astartes are practically immune to all diseases and poisons, and their Primarchs should logically be even tougher), Corruption (Type 1 and 2), Radiation Manipulation (Should almost be entirely immune to the effects of radiation exposure, thanks both to his Power Armor and enhanced physiology), Heat Manipulation (Astartes are incredibly resistant towards extremes of hot and cold, and logically their Primarchs should be far superior), Pain Manipulation (Astartes possess the physiology and mental training to shrug off debilitating injuries, and their Primarchs should easily scale)

Attack Potency: Solar System level (Although generally recognized as the weakest in direct combat, should be comparable to the other Primarchs, such as Sanguinius, who managed to make a small crack in Chaos-empowered Horus' armor and had earlier before fought Ka'Bandha, one of Khorne's greatest Bloodthirsters, and broke his spine. Ka'Bandha is almost certainly stronger than lesser Bloodthirsters, who can grow to the size of star systems in the Eye of Terror, and the likes of Khârn, who can fight great enemies in the Eye of Terror. "Alpharius" faced off against the likes of Rogal Dorn but was ultimately killed in the conflict). Capable of ignoring durability with the Sarrisanata

Lifting Strength: Class T (Should be comparable to Angron)

Stamina: Extremely high (Primarchs are capable of fighting with shattered ribs, caved in abdomens and even fractured skulls. Nothing short of a killing blow can stop them, and even their immensely lesser Space Marine sons can fight for weeks on end without stop)

Intelligence: Extraordinary Genius. (His/their tactical knowledge and intellect is capable of contending with others of extreme intelligence such as Roboute Guilliman and Perturabo. Efficient leaders of the Alpha Legion and masters of anonymity and coordination, such that many of his brothers have no idea what he's thinking or what he's planning. His Legion is considered to be the greatest spies, a notable example being a squad of Alpha Legions successfully infiltrating Macragge and fooling even Roboute Guilliman. Every Primarch bears intelligence far beyond all manner of the average or even above average human reach, with virtually all of them being considered grandmasters in the fields they hold expertise in, with few capable of matching up their intellect individually)

Alpharius faces off against Dorn in the Battle of Pluto. 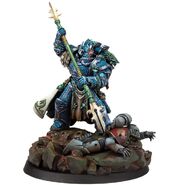