VS Battles Wiki
Register
Don't have an account?
Sign In
Advertisement
in: Tier 9, Tier 9-C, Tier 9-B,
and 45 more 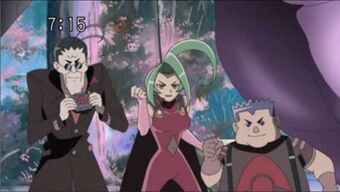 The Alpha Trio is a trio of 3 Alpha Gang members. Consisting of Ursula, Zander and Ed, their main goal in the first season is to steal Dinosaur Cards from the D-Team.

Powers and Abilities: Peak Human Strength, Superhuman Speed and Durability, Can hear anyone insulting her or saying old lady (even if she wasn't concerned) from anywhere on earth, 4th-Wall Breaking, Toon Force | Superhuman Physical Characteristics, Perception Manipulation (Bystanders will perceive their chibi form as a modern animal), Small Size (Type 1), Enhanced Senses, Acrobatics | Everything but Perception Manipulation on a higher scale Summoning, Martial Arts, Breath Attack, Fire Manipulation and Heat Manipulation with Fire Dinosaurs, Water Manipulation with Water Dinosaurs and Earth Manipulation with Earth Dinosaurs, Danmaku, Statistics Amplification, Weather Manipulation/Illusion Creation (Causes the sky to appear darker when aggressives), passive Space-Time Manipulation (Can transport themselves and others to a prehistoric battlefield that prevents interference from the modern world), Non-Physical Interaction, Resistance to Air, Fire and Lightning, possible Resistance to Energy Projection, Regeneration (Low-Godly) | All previous abilities but to a greater degree

Attack Potency: Street level (Ursula lifted a huge pile of treasures, mostly made of gold where Ed and Zander were sitting) | Wall level (Comparable to Chomp who fought a crocodile) | Multiverse level (The Element Stones used to evolve the Chibi forms of the Dinosaurs into their True Forms rivals that of The Cosmos Stones, which have the ability to contain whole universes within them and together can cause the destruction of all reality, of which there are timelines per every moment in time. The True Form Dinosaurs have to at least be somewhat comparable with the Element Stones as they use their energy to fight and achive their form to evolve) | Multiverse level (Comparable and shown at times to be even superior to the Spectral Pirates' Dinosaurs, who were shown to be superior to one Cosmos Stone. Can affect realms outside the Multiverse as a result of clashing) | Multiversal (Empowered by the Red Cosmos Stone) | Unknown, possibly Multiverse level (Can be comparable to the Cosmos Stones)

Lifting Strength: Average Human, higher for Ursula (lifted a huge pile of treasure mostly made of gold) | Class 100 (Capable of throwing Chomp and other dinosaurs several meters above the ground) | Unknown

Intelligence: Average maybe higher for Ursula (Stated to have 300IQ in the arcade game but doesn't seems to be that smart in the Anime) | Average