VS Battles Wiki
Register
Don't have an account?
Sign In
in: Characters, Game Characters, Crysis,
and 17 more 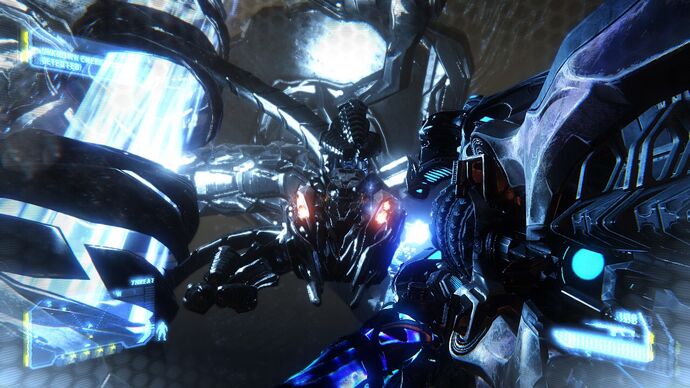 Name: Alpha Ceph, System X (false alias by C.E.L.L as the energy-nexus of all C.E.L.L facilities on Earth)

Age: 27 years old (it was created on Lingshan Island after the nuclear strike)

Powers and Abilities: Superhuman Physical Characteristics, Telepathy (As the Alpha, it is the collective hivemind of all Earth Ceph, it can mentally control them, giving them orders, tactics, and strategies along with making them doing anything it wants, this also applies to those using Ceph technology), Mind Manipulation (Can show visions to people depicting events from the past or future), Absorption (Can absorb and assimilate the minds of those using Ceph technology into the hivemind, can absorb energy from nearby sources), Telekinesis, Energy Projection, Energy Manipulation, Electricity Manipulation, Forcefield Creation, Precognition, Space-Time Manipulation (Can open wormholes by opening a time-space gap, generating and converting mass-energy as well as manipulating the faster-than-light tachyon particles, through that it can send information to the past from the future), Time Travel to some degree, possible Enhanced Senses (Can potentially detect invisible threats), Reactive Evolution, Nanotechnology Manipulation (Easily disabled Nanosuit 2 and prevented its puppet Karl Rasch from being scanned)

Attack Potency: At least Planet level (Easily destroyed an entire facility and supplied energy for CELL and the entire Earth for more than two decades nonstop when it was dormant, the Archangel was feeding energy from it, the energy pillar it generated could destroy the Earth if there was a slight instability which would release a fraction of its energy and it stalemated Prophet with a fully-evolved and no-limiter Nanosuit 2), possibly Star level (Its mass-energy beam created a wormhole following the detection of Hawking radiation and the formation of a white hole)

Speed: At least Massively Hypersonic+ (As fast as Prophet with a fully-evolved Nanosuit 2, comparable to most Ceph ships, which can easily travel this fast in outer space. Can generate cloud-to-ground lightning)

Lifting Strength: At least Class K+ with its sheer size, much higher with telekinesis

Durability: At least Planet level (It is unlikely that it can be destroyed by the orbital satellite superweapon Archangel, a weapon whose power at 5% can vaporize New York, punch one hell of hole through Earth, destroyed and launched a section its crust to space, destabilize and cause planetary destruction and even possibly destroyed the planet itself), possibly Star level (Stalemated by a fully-evolved Nanosuit 2)

Standard Equipment: Its snake-like/worm-like exosuit which has drilling weapons that can fire energy blasts

Intelligence: Extremely High (A normal Ceph was already beyond human understanding, and the Alpha Ceph was the mastermind that manipulated Rasch and set up Prophet and made him rebel to set it free from its CELL prison and disabled the Archangel to eliminate any possible threats to its plan on colonizing the Earth.)

Weaknesses: If contained then its "children" (all Cephs on Earth) will become mindless animals while all robotic and most units will be disabled due the lack of energy source. Its weak point is the exposed body inside its exosuit and its death would result in the destruction of every Ceph on Earth.

The wormhole that Alpha Ceph opened while was stated multiple times to be connected to the M33 galaxy, the parent galaxy of the Earth Ceph.

As the Earth Ceph's seeding ship arrived at Earth 65 million years ago from the Ceph overhive Hyperion of M33 galaxy, we can the draw possibility that the overhive at the fringe of M33 galaxy that received the distress signal requested the closest overhive with the same origin from the Milky Way Galaxy to take care of it instead and the Alpha Ceph re-established the wormhole to the outer space of the Alpha Quadrant overhive and waited for its invasion fleet arrived at the Earth.

This, too, open the possibility that the entire Milky Way Galaxy is possibly filled with countess other advanced Ceph.

When the Alpha Ceph formed the wormhole with its Liberty Beam, NAX confirmed there is a massive amount of negative mass-energy being launched into space, and one of satellite-detected Hawkin radiation and the formation of a white hole, which highly suggested the wormhole was created according to the law of physics, not some nonsense technobabble since the wormhole can be considered as the negative energy counterpart of a black hole (the link above).