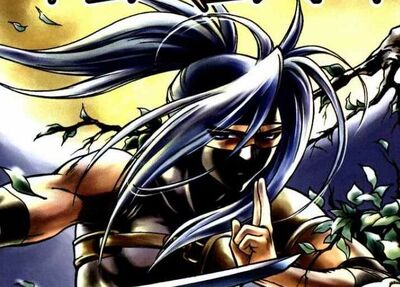 Alpha the Ranger (though he persistently insists he is a ninja) is one of the most powerful players in the game and was partnered with Aradon during the Tournament Arc. His class was originally thought to be Assassin, but in actuality, he has gained a high level in nearly every class, profession, and skill in an attempt to become a ninja. By verdict of Ilban, however, everyone calls him a Ranger, and he is recognized as Alpha the Ranger even when he takes on other identities. He constantly changes his screenname, cycling through letters of the Greek alphabet. He assumed the name of Sauel Abi Beta, a martial artist, during the Demon Invasion Arc. During the Yureka Massacre Arc, he presented himself as Gamma, Phantom Hunter, and decided to fight against Jaeha. In the Last Saga Arc, he disguised himself as Delta, a musician. In addition, he is known as Crimson Satellite Omega in Cyberquest, and is by far the best player, closely followed by Persona (Il-ban's CQ character), Kamus, and Kite.

In real-life he is Woon-Ha, the older brother of Ah-dol (Woon-Suk), and is the proprietor of a net cafe frequented by such characters as Lotto and Ollie. He has a largely unexplained knowledge of the underworld of hunters and killers. He has at least one contact within Dexon and has displayed considerable hacking skills, which he seems to employ as a Hunter.

Speed: At least Supersonic (Can fight with Ban)

Cloning - A product of alchemy that tricks the mind and creates clones divided in power.

Poison tasting - The ability to recognize any poison by taste.

See dead - The ability to see the dead.

Talk to dead - The ability to talk to the dead.

Holy Cross - Defensive Barrier against attacks if it's still vulnerable to rebound shots.

Healing - Ability to cure any injuries.

Retrieved from "https://vsbattles.fandom.com/wiki/Alpha_(Yureka)?oldid=4106338"
Community content is available under CC-BY-SA unless otherwise noted.