VS Battles Wiki
Register
Don't have an account?
Sign In
in: Mega Man, Armored Characters, Final Bosses,
and 15 more 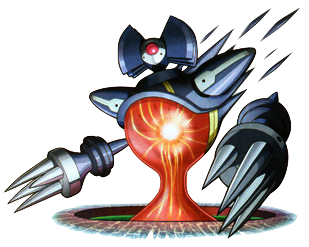 The original Internet created by Tadashi Hikari as part of his top secret project and served as the launching pad to an entirely new, Net-based society. However, one day the massive amount of information it processed along with all the bugs caused by early, faulty programming allowed it to gain an amoeba-like sentience, causing it to take physical form and go on a rampage, causing all devices connected to it to malfunction. The resulting chaos (known only to the upper echelons of SciLab as "The Alpha Revolt") was initially pinned on Dr. Cossack's AutoNavi, Bass.EXE, starting the spiral of events that led to the advent of the Cyber World's God of Destruction. When Alpha itself was discovered to be the cause it began devouring the entire Cyber World, NetNavis, programs, and all. It was eventually sealed by Tadashi Hikari's Guardian program before being locked away by four TetraCodes that were later hidden around the Net. Wily would later organize WWW to release Alpha and initiate "Cybergeddon" as a final act of revenge against Tadashi Hikari, only for it to backfire when Alpha swallowed both Bass and Wily himself. MegaMan.EXE later defeated it, but had to sacrifice himself to save Lan after the last remaining fragment of Alpha attempted to swallow the young Hikari. Luckily, Mega Man was saved when it turned out that Tadashi's last program protected his grandson from Alpha's collapse. Thus the monstrosity was put down for good.

Age: At least 40-50 Years Old (the original draft of the Internet, created when Tadashi Hikari was still in his prime)

Classification: Basis for the Current Net Community, The Original Internet

Powers and Abilities: Superhuman Physical Characteristics, Incorporeality (Is the Cyberworld itself as the Cyberworld has been stated to be a universe), Self-Sustenance (Types 1, 2 and 3), Omnipresence, Electricity Manipulation, Telekinesis, Attacks, Regeneration (High-Mid), Barrier Creation, Can swallow others to absorb their power, Matter Manipulation and Energy Manipulation (Was breaking down and absorbing the Cyber World), Soul Manipulation

Attack Potency: Low Multiverse level (Embodied the Cyber World itself at one point. Could only be defeated by someone as powerful as MegaMan.EXE, also swallowed Bass.EXE with ease, drastically increasing its power, attempted to break down and absorb the entire Cyber World)

Speed: Omnipresent (Is the Cyberworld itself)

Durability: Low Multiverse level (Embodied the Cyber World itself at one point, took hits from a serious MegaMan.EXE and forced him to self-destruct to save Lan), it's armor is virtually invulnerable to conventional attacks, thus requiring foes to attack its Core instead, which is covered by a regenerating goo-like shell.

Stamina: Limitless, doesn't tire as it's an amoeba-like creature and also doesn't experience the concept of pain.

Standard Equipment: Its arms, a regenerating goo-like shell that protects its core, the only vulnerable part of its body, Machine Guns attached to its shoulders

Intelligence: About as intelligent as an amoeba, but can recognize threats and will swallow anything and everything it can as part of its basic survival instinct.

Weaknesses: Although it's outer shell is virtually invulnerable against conventional attacks, its core is much more vulnerable and can be attacked after the goo-like shell covering it is destroyed.