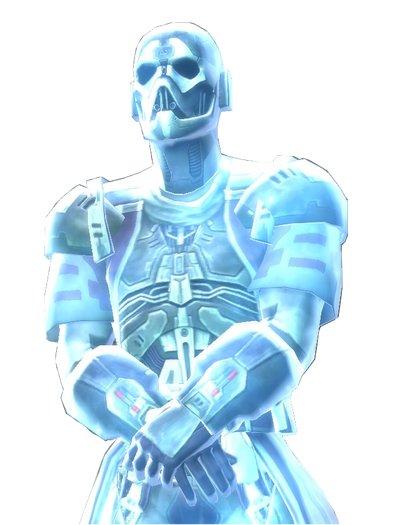 Aloysius Kallig was a male Sith Lord of the Old Sith Empire. Like many ancient Sith, his name was all but forgotten. The only known mention of Kallig was in the writings of the famous Dark Lord of the Sith Tulak Hord, who noted him as the greatest of his rivals. He was the ancestor of the Sith Inquisitor, Darth Nox, who he met on Dromund Kaas and had an important role supporting Darth Nox's path to power.

Powers and Abilities: Superhuman Physical Characteristics, Precognition/Prescience, Force-enhanced reflexes/reactions, Clairvoyance, Telepathy (At least equal to his descendant if not above him, Darth Nox, who could mentally duel with the Avatar of Sel-Makor who in turn could match telepathic power with the Sith Emperor), Psychometry, Telekinesis (Displayed casual ability to fling Darth Nox around like a rag doll as well as the younger Sith Warrior/Wrath upon entering his tomb and was close enough in power to rival closely Tulak Hord's own power), Illusion Creation, Telekinetic blasts and shields, Aura Sensing, Enhanced Senses and Perceptions, Mind/Memory Manipulation, various lightsaber combat skills, Skilled Swordsman (Considered an equal to Tulak Hord and has slain Hord's previous general in a duel), Extremely talented military strategist and general, Immortality (Types 1, 6, and 7), Energy Manipulation (Can reflect, redirect, and absorb energy attacks thrown at him), Regeneration (Mid-Low; in the form of Force Healing), Force Drain, Force Lightning, Force Sense, Transfer Essence (Survived as a spirit/Force-Ghost for over 1900 to 2100 years transcending his physical death)

Attack Potency: Planet level (Was a peer of Tulak Hord, who feared Aloysius and stated that Aloysius was his most ambitious and dangerous rival; more powerful than Darth Nox even with two other Force Ghosts bounded to him)

Speed: Relativistic with FTL combat speed and reactions (Comparable to Tulak Hord and other Dark Lords of the Sith)

Lifting Strength: Peak Human naturally. Can be augmented to Superhuman levels with the Force. Class G with telekinesis (Being a Sith Sorcerer, his telekinetic powers must be highly refined even for a Force user of his calibre, and therefore should be comparable to the likes of Tulak Hord)

Stamina: Very high (Was a peer of Tulak Hord's in all regards)

Range: Extended melee range with lightsaber. Tens of kilometers with telekinesis via power-scaling. Galactic as a Sith spirit (Could move and travel as a Force-Ghost from Dromund Kaas to different parts of the galaxy)

Intelligence: Master lightsaber duelist and warrior in general; became Tulak Hord's greatest general through sheer force of will, skill, and power. Accumulated so many military victories leading Hord's army that the former became jealous of his talents. Was stated to be the most powerful and greatest as well as most dangerous of Tulak's rivals because of his cunning and powers and mastery over the Force.

Weaknesses: Overconfident (Didn't expect Tulak Hord to have sent assassins to kill him and considered him a friend)

Retrieved from "https://vsbattles.fandom.com/wiki/Aloysius_Kallig?oldid=6622374"
Community content is available under CC-BY-SA unless otherwise noted.