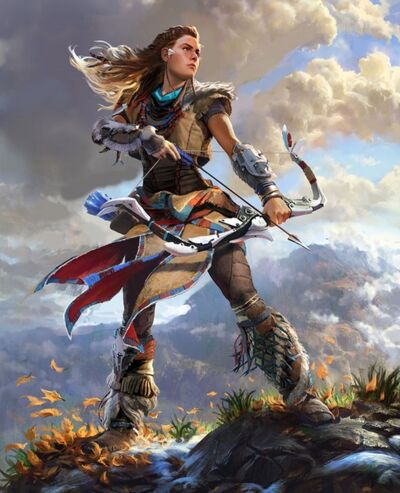 Aloy is the main protagonist of the game Horizon Zero Dawn. After being artificially created by the AI GAIA she was left at the gates of All Mother's mountain. When the Matriarchs found her, Aloy was banished from the village and would spend her days with her father figure and mentor Rost.

Attack Potency: Building level (Can easily trade blows with and destroy Sawtooths, which are this powerful)

Lifting Strength: Superhuman (Can carry dozens of armor sets and weapons as well as hundreds of resources all at once)

Durability: Building level (Can easily take full-powered tackles from early-game Sawtooths, which are this powerful. The machines in Horizon Zero Dawn can destroy multiple trees just by bumping into them, others like the Corruptor can crumple large boulders by walking into them or lodge them at Aloy at high speeds)

Stamina: High (Can fight for days without resting)

Range: Extended melee range with Spear, a few meters with rattler and slingshot and tens of metters with her bow.

Intelligence: Gifted, Aloy is one of the few humans that were capable of uncovering the mysteries of the world and the only person to learn how to use a focus by themselves. Is a clone of scientist Elisabet Sobeck, and possesses her intelligence. Due to Rost's rigorous training she is very combat savvy and quite the thinker.

Weaknesses: If she is fighting a powerful opponent her resources will quickly deplete leaving her with only her spear. Her spear takes a few seconds before it can hack something again. She can be hot-headed at times.

Retrieved from "https://vsbattles.fandom.com/wiki/Aloy?oldid=6901143"
Community content is available under CC-BY-SA unless otherwise noted.