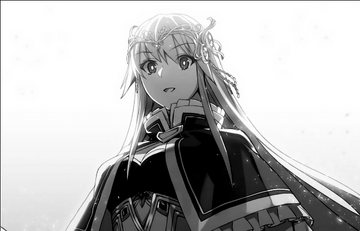 Tier: At least 1-A, likely higher

Age: Beyond the concepts of time

Attack Potency: At least Outerverse level (Exists in the White Room, a transcendental blank canvas, the source of everything whilst also devoid of it entirely, stands beyond the layered structure of the universe, with her power in relation to it being compared to that of an author, where any extensions or recursions of greater universes, each trivializing the last, are under her full control and exist as something she can arbitrarily expand while being beyond the reach of the process entirely), likely Outerverse level+ (Can increase her own transcendence boundlessly at will, reaching arbitrarily higher than infinity, where each transcendence makes foes that were previously comparable to her in power completely exceeded, as she has reached a higher order of reality, which trivialises the lower orders.)

Weaknesses: She cannot look at very small objects (normal universes), because they are too fragile to her. If she looks at them, they will disappear.