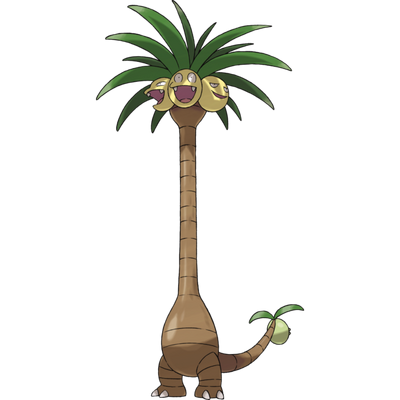 Alolan Exeggutor is the Alolan version of the Pokemon Exeggutor, hence the name. Like its mainland counterpart, it evolves from Exeggcute with the power of a Leaf Stone. Due to the intense sun in Alola in comparison to the other areas of the Pokemon world, it grows much taller than other Exeggutor, and this awakens some sort of draconic power within it. For some reason, it is the pride of the Alolan people.

Speed: Relativistic+ (Can keep up with Poliwrath)

Stamina: High (Should have superior stamina to Raticate, who can swim across oceans with no effort)