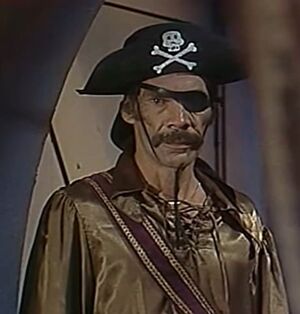 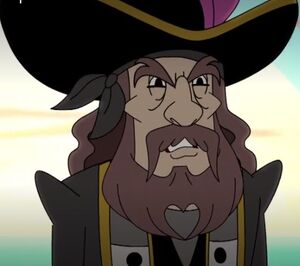 Alma Negra (Black Soul in English) is the leader of a pirate gang, Black Soul does not hesitate to kill who (including subordinates) help him hide his wealth.

Among his minions are Panza Loca, Sabandija, and Matalote. In pirate episodes, there is never continuity, so it is not known if the Ghost of Black Soul that appears in episodes like "The Ghost of the Pirate" of 1975 or "The Chest of the Pirate" of 1976 are the same. Because of this, it is also not known if the one that appears in the saga "The old pirates of the Caribbean only occasionally deviated to Cuba" from 1975 is the same one that appears in the saga "The Pirates of Pittsburgh, sorry, of the Caribbean" 1978.

Although he has a habit of wearing an eye patch, Black Soul has both his eyes. He said he uses the patch only because it is part of the uniform. He said it is so rough that it killed the Dead Sea.

He has a special appearance in El Chapulín Colorado (animated series) in chapter 50, but he only appears with 2 pirates, and without their classic minions.

Tier: 9-B physically, 5-B with the Mega Planet Buster Laser Cannon | At least 8-C physically, higher with equipment

Superhuman Physical Characteristics, Self-Sustenance (Type 1; Can survive in the vacuum of space), Stealth Mastery, Intangibility (Only used ocasionally), Skilled in Hand-to-Hand Combat, Energy Projection (With Laser Cannon), Weapon Mastery, Breaking the Fourth Wall, Resistance to extreme cold, and cosmic radiations (Can travel through space, which is freezing cold and filled with radiation)

Same as before with Toon Force

Weaknesses: He is very overconfident of himself and he does not take his enemies seriously

Retrieved from "https://vsbattles.fandom.com/wiki/Alma_Negra?oldid=7024191"
Community content is available under CC-BY-SA unless otherwise noted.