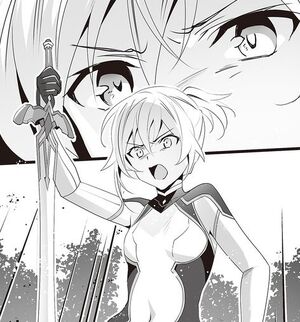 Note: This profile contains spoilers for the Saijaku Muhai no Bahamut series. Please do not continue if you have yet to read the series and do not want to be spoiled.

Alma Kilzrake is one of the protagonists during the latter parts of Saijaku Muhai no Bahamut. Introduced as a member of the Kilzrake Family Mafia who is the candidate to take Ilu Kilzrake's place and holds an extreme devotion towards the Black Hero, she's actually Almatea Atismata, Lisesharte Atismata's younger sister who was thought to have died during the coup d'état five years ago.

Lifting Strength: Above Average Human | At most Class G (While considerably weaker, should somewhat scale to Academy arc Philuffy Aingram)

Stamina: When she was a child, Alma received a Baptism, which can inflict agony beyond imagination, being described by people who survive them as having their blood boiling in addition to feel pain across their entire body, and stated by Singlen to tamper a lot the nerves in the whole body, and recovered from it.

Weaknesses: Gets emotional when the Black Hero is mentioned

Retrieved from "https://vsbattles.fandom.com/wiki/Alma_Kilzrake?oldid=6172748"
Community content is available under CC-BY-SA unless otherwise noted.