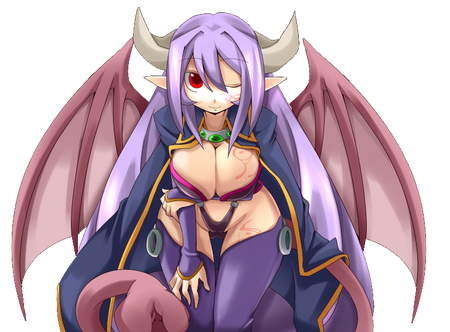 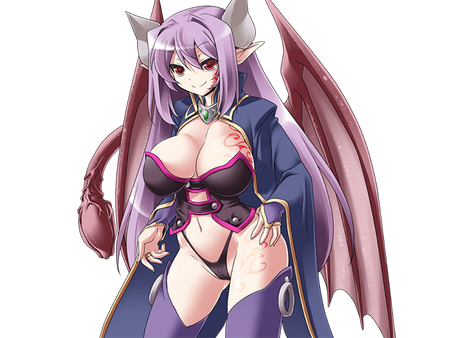 Alma Elma is the Queen Succubus, as well as being one of the Four Heavenly Knights serving Alipheese Fateburn XVI. Despite her role as the Queen of the succubus race, she holds very little control over them, as succubi are individualistic and carefree individuals, and she is no exception. As a result, she tends to mostly do her own things instead of doing her job as a Heavenly Knight, although she is still loyal to Alice.

Out of the four knights, she represents the wind element and has shown mastery over it despite not being directly affiliated with Sylph. She is also by far the most hedonistic and sadistic, attacking humans on a whim, although she is willing to go along with Luka's coexistence goals.

In the Paradox Timeline, she quickly gave up on her role to serve Alice XV, as she pledged alliance to her daughter, not her. Thus she went back to doing as she pleased until she was crossed by the Lilith Sisters, causing her to chase after them and attempt to defeat them, even joining up with Luka's party.

Attack Potency: Multiverse level+ (Grievously harmed Morrigan and Astaroth when fighting both at the same time and later stalemated with Lilith. Fought Alice for the throne in the past. Helped in Dark Goddess Ilias' defeat) | Multiverse level+ (Stronger than before)

Speed: Immeasurable (Considered one of the fastest characters in the series. Superior to Alice and presumably Ilias) | Immeasurable (Faster than before)

Range: Extended melee range, hundreds of kilometers with magic (Comparable to other types of magic capable of creating earthquakes)

Standard Tactics: She will normally try to use her speed to overwhelm her opponents and will mainly use seduction and other sexual techniques to win. Although later on, she became willing to use martial art techniques to defeat strong foes.

Weaknesses: She was initially unwilling to use her martial art techniques, although she eventually got over it

Retrieved from "https://vsbattles.fandom.com/wiki/Alma_Elma?oldid=7032045"
Community content is available under CC-BY-SA unless otherwise noted.