VS Battles Wiki
Register
Don't have an account?
Sign In
Advertisement
in: Humans, Male Characters, Leaders,
and 21 more 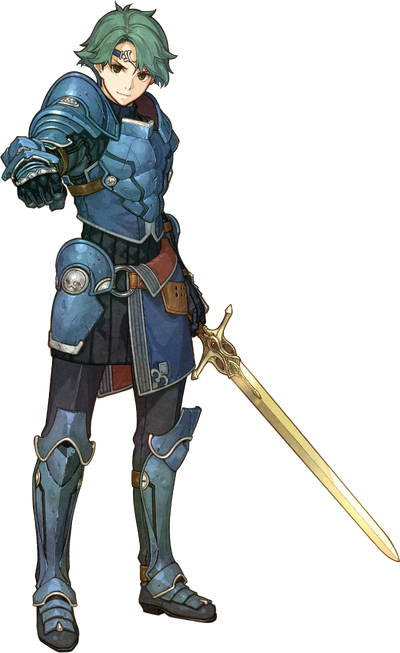 Alm is an idealistic youth hailing from Ram Village under the care of his grandfather, Mycen. As he grew older, he became frustrated with his grandfather's attempts to keep him in the village, later running off to join the Zofian Deliverance along with his best friends, Gray and Tobin to protect his fellows from brigands and liberate Zofia from Chancellor Desaix's control. Throughout his adventures, he discovered that he was not a mere Zofian as he once thought, but was, in fact, the crown prince of Rigel, Albein Alm Rudolf, who possessed the royal blood of the Divine Dragon Duma.

Classification: Human, Military Leader, First King of the One Kingdom of Valentia

Attack Potency: Town level (Alm has the ability to confront and cut down Zeke if he doesn't rescue Tatiana) | At least Large Island level (Able to fight and defeat the God Duma, Falchion has the goddess Mila inside of it)

Standard Equipment: Royal Sword, a blade that can only be wielded by those with royal blood and is virtually impossible to take into one's hand otherwise. It heals Alm between exchanges of combat while also allowing him to use the Double Lion and Scendscale techniques. | Falchion, also known as the Kingsfang, is a blade forged from a fang of Naga that contains monster-slaying and god-slaying properties, being able to seal entities as powerful as Mila and slay the likes of Duma. Like the Royal Sword, it heals Alm between exchanges of combat and grants him access to Scendscale.

Intelligence: As the Rigel's crown prince, Alm possesses the blood of many warrior kings of ages past, granting him a natural aptitude for combat, leadership, and strategy. Throughout the war, Alm refined the swordsmanship he learned under his adoptive grandfather, the legendary knight Mycen, becoming a capable warrior who led the numerically inferior and ill-equipped Zofian Deliverance to victory over the hardened elite soldiers of Rigel. However, he is known to be overly stubborn and somewhat headstrong, diving into a group of bandits to save a single girl. Also, he is extremely attached to those he holds dear, such as Celica, and can be swayed by the thought of his loved ones being in danger.

Weaknesses: Alm can be overly idealistic and attached to the ones he holds dearest, a trait that can be used to manipulate him.

Key: Base | With Falchion

Alm as a Conqueror.