VS Battles Wiki
Register
Don't have an account?
Sign In
in: Hunter X Hunter, Characters, Manga Characters,
and 16 more

Alluka Zoldyck (アルカ＝ゾルディック, Aruka Zorudikku) is the second youngest child of Kikyo and Silva Zoldyck, and sister of Killua, Illumi, Kalluto, and Milluki. She was possessed by an unknown entity called "Nanika" which created a rift between her and her family, all except Killua.

Name: Alluka Zoldyck | Nanika (The "demon" inside her - "Something" from another place)

Classification: Human, Nen User with while in Nanika State. Nanika is speculated to be part of the "Ai" species on the Dark Continent.

Alluka is just a normal child while in this state, Multiple Selves (Type 1; Nanika exists within her)

Possession (Nanika possessed Alluka), Nen Manipulation (Nanika's Wish Granting is through Nen), Wish Granting (Nanika can grant wishes; the degree of wishes is limitless according to the Zodiacs, ranging from slightly levitating others to manipulating probability and reality): Telekinesis (Can levitate people in the air, crush them until only blood drops remain and wring them. The possible consequences of a wish to lift a powerful Nen contract could number in the tens of thousands being killed according to Illumi), Death Manipulation (Should her requests not be fulfilled, the person and their loved ones will die instantly. Nanika can also kill by being asked to), Probability Manipulation (Made a billion dollars rain from the sky), Healing (At least Low-Mid. Was able to heal a mangled Gon), Curse and Law Negation (Lifted Gon's Vow. Vows or Contracts by nature are stricter than Limitations), Teleportation (Teleported Illumi to another continent), Durability Negation (Many of Nanika's abilities ignore conventional durability)

Attack Potency: Human level | Unknown (Her wish-granting abilities are "probably limitless", she can do "anything" according to the Zoldycks. However, there is a restriction on healing. The exact extent and nature of her Wish-Granting is unknown)

Range: Hundreds to thousands of kilometers (Nanika was able to teleport Illumi to another continent)

Intelligence: Below Average. Unlike other members of the Zoldyck family, she is not particularly intelligent, presumably due to a lack of training and being shut off from the rest of the world at a very young age. She is shown to be very naive and exhibits the mindset of a normal 11-year-old.

Weaknesses: Trusts Killua blindly. Alluka's restorative power is not as prominent as her destructive power as she has to touch the targets to heal them, and it appears to be very taxing on Nanika, as it causes Alluka to fall asleep from exhaustion. She doesn't have any significant physical capabilities, unlike most of her family members.

Alluka can make requests to anyone at any time, when someone fulfills three of these requests she will grant a wish to the person who fulfilled them, Nanika, the inner "demon" thing inside him/her will emerge and grant any wish, and, so far it granted any wishes made in the series, such as lots of money, a hug or healing someone who's about to die. The downside of the ability is that the next request made will be in the same tier as the last wish; if the wish was something simple, then it will be easy to fulfill if it was something hard, important or expensive the next requests may be dangerous/hard things to give. Also, if someone rejects four requests, he or she will instantly be erased of existence together with a loved one, so at least two people will die if four requests are declined.

There are also extra rules for this Alluka/Nanika ability:

Rules known only by Killua: 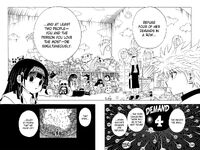