VS Battles Wiki
Register
Don't have an account?
Sign In
in: Bendy and the Ink Machine, Female Characters, Video Game Characters,
and 10 more 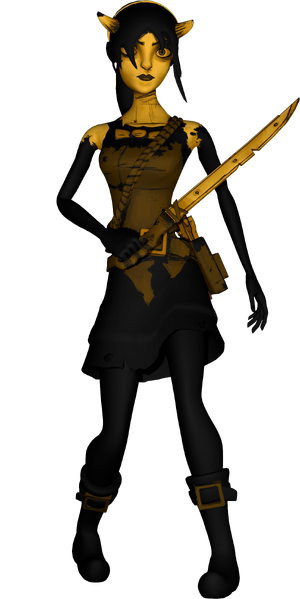 Allison Angel is the cartoon form of Allison Pendle and the alternative form of the original Alice Angel who appeared at the end of Chapter 4: Colossal Wonders and throughout Chapter 5: The Last Reel of Bendy and the Ink Machine along with Tom.

Origin: Bendy and the Ink Machine

Powers and Abilities: Superhuman Physical Characteristics, Immortality (Type. 1, 2, 3, and 8, She can't truly die until all of the ink is gone or destroyed, if she dies she'll return to it and can reform from it), Regeneration (Low-High; she can reform from her ink or any ink), Ink Manipulation and Weapon Creation (She can create items, weapons and etc. from ink), Weapon Mastery (She is very skilled with her dagger and other weapons), Enhanced Senses, Intangibility (Her ink physiology should allow her to go through ways the same way other ink creature can), Stealth Mastery (She is capable of hiding and stealthing past Bendy, to which her could not find where Tom and her home was).

Attack Potency: Wall level (She was capable of killing Alice Angel and should be comparable to Henry)

Speed: Average Human (Can keep up with Henry)

Lifting Strength: Average Human (Should be comparable to Henry)

Durability: Wall level (Should be comparable to Alice Angel and Henry)

Stamina: High (Could fight a massive horde of ink creatures without tiring)