Due to Hitler being erased from time the Soviet Union grew more powerful. A group of European countries banded together to resist Stalin's attacks. After the war was over it expanded to other parts of the globe. Due to alterations to the time-line they possessed advanced weapons beyond their time-period.

Tier: Likely at least Low 7-B for super-weapons. Most normal forces are 9-A to High 8-C

Population: Hundreds of millions (population of the US and Europe and some other countries)

Attack Potency: Likely at least Small City level for super-weapons (Allies had nuclear weapons in Red Alert 2 before the psychics disabled them (in Red Alert 3 time-travel erased nuclear weapons). The Weather Control Device and Proton Collider are implied to be nuclear in strength (in the Yuri's Revenge mission "Power Play" and the Red Alert 3 mission "The Science of War" respectively). President Howard T. Ackerman had a weapon that could level Moscow in the Red Alert 3 mission "A Monument to Madness"). Most normal forces are Small Building level to Large Building level.

Industrial Capacity: Thanks to mostly automated assembly weapons can be quickly produced for specific battles.

Military Prowess: At least around 32 million troops (assuming countries in this timeline had around the same troops as their real world counterparts).

During the first Red Alert the pragmatic Gunter von Esling served as the Supreme Commander of the Allied forces. The patriotic Greek General Nikos Stavros served as his second in command. But Nikos Stavros becomes disillusioned after the Soviets took Greece. Soviet Major Vladimir Kosygin would defect to the Allies after learning of Stalin's ruthlessness and give Intel on the Soviet nuclear program. The laid back but serious Brigadier-General Ben Carville also ran many allied operations. Dr. Albert Einstein served as an important scientist aiding in developing many of the Allies more advanced weapons.

During Red Alert 2 United States President Michael Dugan and the European Council commanded the Allied military. General Ben Carville served under the president as his second in command. General Réne Lyon served the European Council and advised the President about how to get their support. Lieutenant Eva Lee served as an intelligence officer. Dr. Albert Einstein still served as an important scientist.

US President Howard T. Ackerman was a fanatic at wanting to destroy the Soviet Union. Even when the allies tried to make a peace treaty with the Soviets and work together against the Empire he attempted to sabotage it by firing a weapon at Russia. He is defeated and seemingly killed. He was actually an android created by the Empire to get the Allied and Soviets to weaken each-other. European Union President Rupert Thornley would have dubious dealings with the FutureTech corporation in a plot to build the Sigma Harmonizer. Kelly Weaver was spokesperson for the FutureTech Corporation.

Dr. Gregor Zelinsky was a Soviet scientist that defected to the Allies out of moral concerns.

Weaknesses: Since the Allies value mobility and subterfuge their vehicles are not as often as heavily armored as their rivals. Most members have normal human weaknesses. 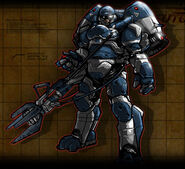 Add a photo to this gallery
Retrieved from "https://vsbattles.fandom.com/wiki/Allied_Nations_(Command_%26_Conquer)?oldid=4598516"
Community content is available under CC-BY-SA unless otherwise noted.