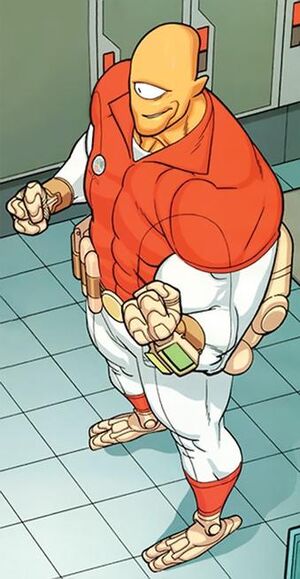 Attack Potency: Possibly Planet level (Fought with Beginning of Series Invincible) | Planet level (Comparable to Adult Viltrumites but weaker than Thragg. Invincible was not sure if he could fight Allen, to which Allen said that he could not. Stated to be one of few non-Viltrumites with a similar power level to a Viltrumite)

Speed: Massively FTL+ (His speed is on par with Invincible and Omni Man's)

Lifting Strength: Unknown | Class Y (Around as strong as Omni-Man)

Intelligence: High. Mastery of various alien combat techniques and skills, many years of experience fighting both powerful and diverse enemies who have various abilities and powers.

Retrieved from "https://vsbattles.fandom.com/wiki/Allen_the_Alien_(Image_Comics)?oldid=5480481"
Community content is available under CC-BY-SA unless otherwise noted.