VS Battles Wiki
Register
Don't have an account?
Sign In
Advertisement
in: Tier 7, Tier Low 7-C, Tier 6,
and 75 more 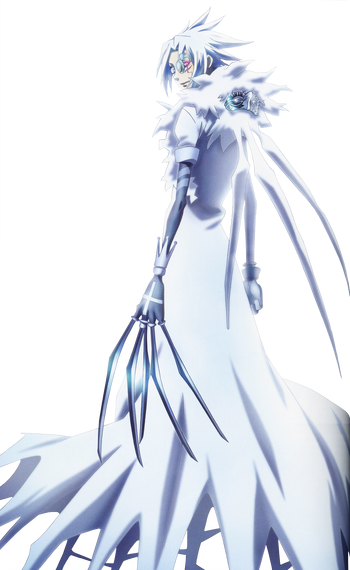 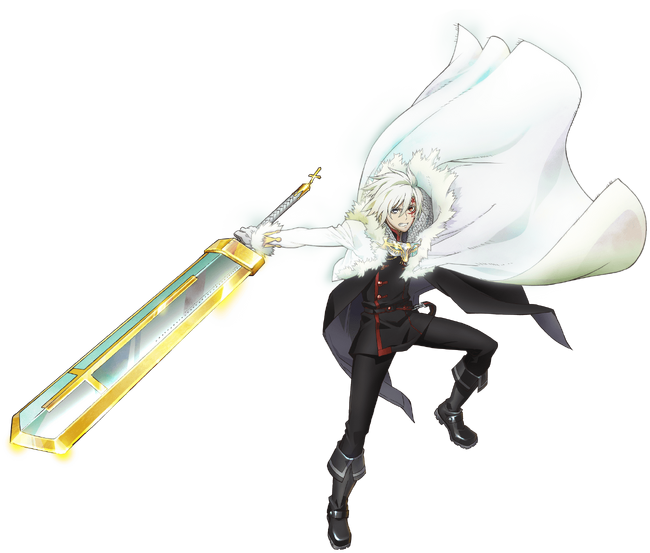 Allen Walker is the main protagonist of D.Gray-Man. Allen is a former Exorcist and a member of the European Branch of the Black Order. He is the current host of the former Noah, Nea Walker. Allen has mostly been seen with Timcampy on his side.

Superhuman Physical Characteristics, Weapon Mastery, Martial Arts, Enhanced Senses and Extrasensory Perception (X-Ray Vision: As an Exorcist Allen can sense intent through his opponents aura, given his training by Cross, Allen can see in the dark with his normal perception), Limited Inorganic Physiology, Bodily Weaponry and Limited Shapeshifting (Allen's left-arm is completely constructed of Innocence, which is a esoteric material that's directly derived from God himself, Allen's Innocence can take the form of several different types of weaponry depending on what level of synchronization with Cross/Crown Clown, Allen is currently at), Information Analysis (Cross and Crown Clown will directly Inform Allen on how to perform certain actions with his newly acquired form of either Cross or Crown Clown), Danmaku (Allen can create large amounts of projectiles with Cross B), Limited Healing and Limited Matter Manipulation (Allen can manipulate the particles of Cross/Crown Clown to reform his weapon if its ever destroyed, these particles also passively heal Allen's wounds), Light Manipulation, Energy Manipulation and Energy Projection (Can create energy hardened light-like constructs from the energy within Crown Clown), Aura, Sense Manipulation and Illusion Creation (Cross and Crown Clown allow Allen to exude a bloodthirsty aura while his emotions are heightened, specifically through anger, Crown Clown can also create sensations and the Illusion of an violent death but this effect only works on evil souls and beings), Size Manipulation, Limited Creation and Cloth Manipulation (Allen can manipulate the length and width of Cross a, Allen can also do the same with the cloth which is created by Crown Clown), Teleportation (Allen can teleport with Crown Clown), Instinctive Reaction, Body Control and Body Puppetry (Cross and Crown Clown will actively react and defend Allen if he's ever knocked unconscious, Crown Clown will also continue to fight and react for Allen no matter the state of his body, forcibly controlling it), Absorption (Attempted to absorb a Dark Matter attack from Tyki Mikk), Dimensional Travel, Portal Creation and BFR (Allen has access to Noah's Ark, which allows one to travel between dimensions and be used to forcefully teleport others into different dimensions as well), Forcefield Creation (Allen can create a forcefield made from the energy within Innocence to block attacks, even attacks which are made from Dark Matter with Crown Clown), Magic and Limited Power Nullification (Timcampy possesses the ability to null barriers with its magic), Multiple Selves (Type 1: Possesses the Noah Memory of Nea within his body, which causes Allen to have a split personality depending on who's currently controlling his body), Statistics Amplification (Allen Innocence greatly increases his stats when activated in any form it takes)

Improved Enhanced Senses, Enhanced Extrasensory Perception, Limited Reactive Evolution, Limited Regeneration and Information Analysis (Soul Vision, X-Ray Vision, Panoramic Vision and Supercolor Vision: Allen's Cursed Eye, regardless of the level allows Allen to see the soul within Akuma, this perception also allows Allen to hear the voice of these souls as well, this perception is omidirectional in a several meter cone which extends from Allen's body, if this eye is ever destroyed it can regenerate but given it takes several weeks for the regeneration to complete it isn't viable within combat, this perception is greatly increased after Allen's Cursed Eye evolved in his fight against Eliade, allowing him to see up to 300 meters via a omidirectional cone, which even allows Allen to see through obstacles which would normally block his vision. This evolved form of Allen's Cursed Eye also grants Allen other perception-based abilities like being able to see a wider range of color comparative to that of a human and even the ability to sense the aura of others even if they don't posses a soul within them. Level 3 greatly increases all of these abilities)

Enhanced Holy Manipulation, Damage Boost and Enhanced Purification (Type 2 and 3: The Sword of Exorcism is Allen's most effective weapon against evil or spiritual beings, causing extra damage against demonic creatures and souls), Enhanced Aura, Sense Manipulation and Illusion Creation (Sword of Exorcism passively exudes energy which is described by Lenalee as "terrible", this energy induces the same effects of Allen's Crown Clown but at a much higher extent, even effecting Lenalee despite the fact that he isn't a evil being like Tyki Mikk and Road who's conscious/senses exist within a pocket dimension), Enhanced Non-Physical Interaction (Allen's Sword of Exorcism could cut through the vacuum that Tyik Mikk created as if it was physical despite the fact the vacuum was devoid of space, air particles or anything that could be physically interacted with), Explosion Manipulation (Allen can create a multitude of consecutive explosions with Death Orbs but such a technique is described by Allen to be "draining"), Mind Manipulation (Sword of Exorcism directly attacks the minds of others through their memories, though this effect only applies to evil entities), Weapon Control (Allen can telepathically recall Sword of Exorcism back to himself)

Energy Manipulation, Energy Projection, Heat Manipulation and Aura (Innocence contains within it energy which can be actively manipulated by Exorcist through their Innocence, said energy can be projected through Innocence as attacks and these attacks carry intense heat, being able to instantly vaporize Akuma, Innocence also exudes a aura while in use), Blessed (Innocence is directly stated to be blessed by god with the ability to purify Akuma), Purification, Deconstruction (Macro-Quantum) and Holy Manipulation (Type 2 & 3: Innocence is used to purify the souls within Akuma, Innocence can purify the Akuma Virus from their wielders body, This purifying effect causes Akuma to disintegrate on a Marco-Quantum level), Non-Physical Interaction and Soul Manipulation (Soul Purification and Soul Removal: Innocence can directly interact with the Soul of an Akuma to purify it and remove it from the body of that Akuma), Limited Power Nullification (Innocence can be used to negate the effects of Dark Matter but this effect only applies to things which are considered "dark" or "evil" such as Dark Matter), Willpower Manipulation and Sound Manipulation (The will of one’s Innocence can become so strong that it causes negative effects on those that are not exorcist), Intangibility Negation (Tyki can’t phase through Innocence despite the fact that he can phase through "all things in this life" with his "choose" ability), Reactive Power Level (The more an exorcist become synchronized with their Innocence, the stronger both become), Passive Causality Manipulation and Space-Time Negation (Innocence passively produces energy that cause strange phenomenons to occur just through its existence alone. Users of Innocence are also capable of negating space-time barriers), Limited Empathetic Manipulation (Innocence can suppress the rage and hatred of another being)

Immortality (Types 4 and 8: Reliant on his Noah Memory of The Pianist (Non-Combat Applicable), Limited Mind Manipulation and Telepathy (Noah can telepathically control all Akuma, this control allows Noah to manipulate the thoughts and actions of Akuma, to the point of being able to force Akuma to do things which they wouldn't normally do like self-destruct), Extrasensory Perception and Enhanced Senses (Noah can sense others around their vicinity and see normally invisible things like Souls)

Stamina: Superhuman (Crown Clownless Allen can fight for 10 hours on end verses Fu, someone who's massively stronger than this version of Allen, has recovered though extreme amounts of pain, such as getting deconstructed on an atomic level and getting melted, With the Crown Clown Allen's body can continue to fight no matter the state of his body), Possibly Infinite while as Nea (Noah's hate and disgust with Innocence is stated to be "Eternal", this hatred in turn creates Dark Matter which is used to increase the stats of Noah and Akuma)

Cross: Cross is a parasitic type Anti-Akuma Weapon that is centralized in the cross-shaped, stone-like Innocence embedded in the back of Allen's left hand. The Innocence has caused Allen's entire arm to be taken over by Innocence, so his arm from the shoulder down is actually "foreign" tissue that his body symbiotically accepts as part of himself. Originally, Allen's arm was quite veinous and red, but over time its color has darkened and the skin has smoothed out, taking on a slightly more normal appearance.

Cross β: This evolution takes a more offensive approach, in the form of a massive arm-cannon with his fingers becoming energy spikes. This form is capable of both ranged and melee combat but tends to use up more energy initially.

Crown Clown: When invoked, Crown Clown acts as a body-armored Innocence, forming a white-hooded cowl and sleeve of Innocence energy which covers his shoulders and right arm, while his left arm and hand become slender and black, clad in armor and razor-sharp claws. A masquerade-style mask is always affixed to the cowl, which takes on various configurations and appearances. This transformation also changes Allen's usual hairstyle from flat to a spiky rear. As before, his Innocence possesses a certain degree of sentience, such as when Crown Clown is able to manipulate Allen's entire body like a marionette when incapacitated, or simply assisting in evasive tactics. When not activated, his arm is black and meets with his shoulder in a spiraling pattern that ends with a tattoo-like emblem.

Sword of Exorcism: When Allen's synchronization rate exceeds 100%, he is able to transmute his entire left arm into a large broadsword with a cross emblazoned on the faces of the blade. In doing so, his left shoulder is capped with a cross-shaped emblem, and his cowl usually forms a cloak to cover the missing arm. Once invoked, the blade can exorcise evil from any vessel it strikes, though it does not harm humans; this means that Allen can damage the inner Noah of members of the Noah family without killing their human bodies. If used against Level 1 to Level 3 Akuma, it vanquishes them in the same effect as the Cross Grave attack, leaving a residual glowing cross crest in the wake of the defeated Akuma. However, in the case of a Level 4 Akuma, the sword carries a diminished effect. Allen is shown with the ability to telepathically recall the Sword to himself, should it be separated from his body.