VS Battles Wiki
Register
Don't have an account?
Sign In
in: Characters, Game Characters, Metal Slug,
and 36 more 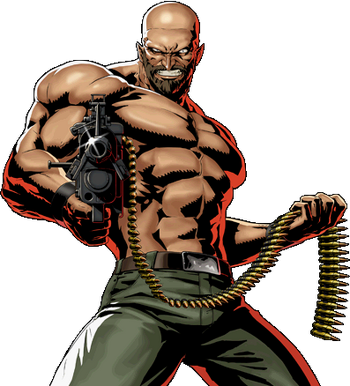 Allen O'Neil is a recurring antagonist in the Metal Slug franchise. He is a prominent member of the Rebel Army and the best soldier of them all. Allen is very confident and likes to taunt the opponent in various ways, but his combat capabilities remain exceptional.

His distinctive traits are the huge machine gun he always carries around and his immortality. Allen is, in fact, famous for always coming back, regardless if he has been killed in a previous battle. He is the true rival of Marco and his comrades, but they have also been allies in the fight against the Mars People and escaped together from the mothership that was about to explode.

Superhuman Physical Characteristics, Weapon Mastery (Is an experienced soldier and is skilled in using bombs, knives and his trusted machine gun), Vehicular Mastery (Is able to fight while on board of the Hairbuster Riberts and to drive the Rebel Gigant), Explosion Manipulation (Via grenades), possibly Immortality (Type 2) and Regeneration (It is unknown how, but he can always return after being apparently killed. He was once eaten by an orca that spat out his bones and he still came back less than a year later), likely Martial Arts, Stealth Mastery and Acrobatics (Stated to be equal to the main characters and that he may have more abilities), Supernatural Willpower (It's stated that the reason he is immortal is his will to return home to be with his wife and child)

Attack Potency: At least Wall level physically (Equal if not superior to Marco and his comrades), Small Building level to Large Building level with weapons (His grenades and machine gun should be comparable to those of Marco and his comrades, which can destroy mid-sized buildings, helicopters, tanks and even giant machines with enough time and hits). Building level to Large Building level with vehicles (Hairbuster Ribert's rockets and bombs should comparable to Marco's special weapons. The Rebel Gigant is equal to the Slug Gigant, which is the strongest of the Slugs and can obliterate tanks and aircrafts with ease)

Speed: Superhuman with Supersonic+ to Hypersonic reactions/combat speed (Able to keep up with Marco and his comrades. His machine gun heavily resembles the M60. Peak Human to Subsonic travel speed and Superhuman to Supersonic+ combat speed with vehicles.

Lifting Strength: Class 5 (Superior to at least one of the Japanese Tank Soldiers, two of which can lift a small tank. Can effortlessy carry his machine gun and use it with a single arm)

Striking Strength: Wall Class. Large Building Class with Rebel Gigant (It can crush tanks by stomping on them and perform a ramming attack)

Durability: Large Building level (Can withstand several hits from Marco's strongest weapons, which require way less shots to destroy a tank). Large Building level with vehicles (Can take an even higher number of hits from said weapons. The Rebel Gigant is equal to the Slug Gigant, which can easily annihilate tanks, and the two can hit each other many times)

Stamina: Very High (Comparable if not superior to Marco and his comrades. Doesn't wear any armor and keeps fighting despite being directly hit many times by firearms and explosives. His body of steel and guts are part of the reason he is immortal)

Range: Standard melee range with his combat knife. Tens to hundreds of meters with weapons and vehicles.

Intelligence: Above Average (Allen is the best soldier of the Rebel Army and participated in multiple wars and battles, even against aliens. His skills and ability match and may even exceed those of people like Marco and the other best members of the Regular Army. Despite his tendency of taunting the opponent, he can be careful in combat and dodge enemy fire with sprints and jumps. He also learned how to use the Rebel Gigant in a short time)