VS Battles Wiki
Register
Don't have an account?
Sign In
Advertisement
in: Tier 7, Tier 7-A, Tier High 7-A,
and 41 more 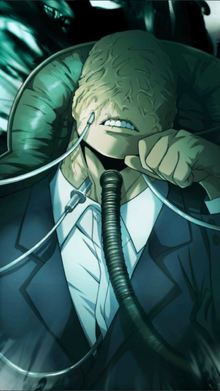 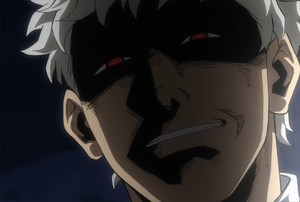 All For One (オール・フォー・ワン Ōru Fō Wan) is the true leader and benefactor of the League of Villains who bears the title of the world's Symbol of Evil, the primary antagonist of the Hideout Raid Arc and the central antagonist of the series, along with Tomura Shigaraki.

Name: All For One, "Shigaraki" (Last Name), "Symbol of Evil"

Superhuman Physical Characteristics, Supernatural Willpower, Expert Hand-to-Hand Combatant (Possesses over a hundred years worth of experience, and should be superior to his protege Shigaraki), Longevity (Has a Quirk that greatly doubles his lifespan), Biological Manipulation, Limited Information Manipulation (Type 2), Power Absorption, and Power Bestowal (Quirks are genetically inherited powers, and he is able to steal, bestow, and even combine multiple biological powers to manifest a new one, such as Warp Gate), Fear and Illusion Inducement (His mere presence caused hallucinations of death to Deku, Todoroki, Red Riot, Ingenium, and Creati), Levitation (Can freely move in the air), Air Manipulation (Can fire large air blast from his arms), Infrared Vision, Attack Reflection (Can reflect the impact of a physical attack back to the attacker), Body Control (Can coil his muscles like springs to boost his striking force and grow additional arms and protrusions), Extrasensory Perception and Information Analysis (Can monitor up to 100 people and analyze their weaknesses), Statistics Amplification (Can improve his muscular strength with his Quirks), Bone Manipulation (Can grow drill-like protrusions out of his bones), Teleportation, Limited Body Puppetry (Can forcibly activate other people's Quirks), Limited Radiation Manipulation (Can create and manipulate radio waves), Damage Boost (With Heavy Payload), Enhanced Attack Reflection (With Reflect and Scatter), Lie Detection (Can sense when people are lying to him), Resistance to Pain (Can use Rivet to reduce the pain of his injuries), Likely many others (He has stolen dozens, if not hundreds of Quirks, but has not shown many of them)

Superhuman Physical Characteristics to a greater extent, Expert Hand-to-Hand Combatant, Longevity, Biological Manipulation, Limited Information Manipulation (Type 2), Power Absorption, and Power Bestowal (With All For One Quirk), Lie Detection (Can sense when people are lying to him), Earth Manipulation (Caused rocks to levitate in his fight with Nana Shimura), Explosion Manipulation and Electricity Manipulation (Created an enormous explosion of electricity in his fight against Nana Shimura), Resistance to Fire (Can casually walk through a wildfire with a hellish temperature of 2000°C), Unknown (All For One's Quirks in his prime are for the most part unknown)

Attack Potency: Mountain level+ (Is capable of holding back Hideout Raid Arc All Might, and even match his power using his Air Cannon. Can increase his strength even further with the Ultimate Quirk Combination) | Large Mountain level (Immensely stronger than in his weakened state. Damaged All Might in his prime and gave him a grievous wound. Blew away an entire city in his fight with Nana Shimura)

Speed: High Hypersonic+ (Superior to Endeavor and Best Jeanist. Could keep up with All Might. Casually dodged a surprise attack from Edgeshot, who can transform faster than the speed of sound), Speed of Light attack speed with Radio Waves (Radio waves travel at the speed of light) | Massively Hypersonic (Has stated that his weakened form is considerably slower than in his prime. As fast as All Might in his prime)

Lifting Strength: Class T (Is capable of grappling with All Might) | Class T (Comparable to All Might in his prime)

Durability: Mountain level+ (Can take All Might's punches with minimal issues, and even managed to survived his United States of Smash, though he was knocked out) | Large Mountain level (Withstood All Might's blows in his prime)

Stamina: Superhuman (Survived a long fight against All Might while on life support)

Intelligence: Gifted to Genius (All For One has a great level of intellect, likely due to his advanced age and life experience, which is worth more than a hundred years. He is the real mastermind behind the League of Villains and has been the one pulling the strings all along, organizing multiple plans at once and putting contingencies in place well in advance, outwitting the heroes on multiple occasions (As seen when he discovered two of U.A.'s secret training facilities (The USJ and the Beast's Forest) and had the Vanguard Action Squad under Shigaraki's command attack the second location to abduct Dynamight and cause discord in the hero society). Through a coordinated attack with both his original body, Tomura/All For One, and his army of Nomus, he was able to free himself from Tartarus, a seemingly impenetrable prison, and attacked multiple other prisons in order to sow further chaos and make it more difficult to track him. He is manipulative and a master of exploitation, as shown when he brought Nana Shimura's grandson under his thrall, with the latter virtually worshipping him in spite of the fact that All For One was the one who killed his grandmother. He also appears to have a nearly impeccable memory, easily memorizing all of the Quirks he's stolen and utilizing them in tandem to make himself a formidable adversary that All Might was only barely able to defeat in their final confrontation)

Weaknesses: All For One is completely blind and is thus forced to rely on his Infrared Ray Quirk and his other senses to properly fight. He appears to have to make physical contact with a target to steal their Quirk. He is a sadist and prefers to crush his opponents emotionally before killing them. The injuries inflicted by All Might weakened him severely, and he requires his support mask to function. His Quirk only has the ability to give and take Quirks, and he cannot destroy any Quirks in his body, even if they are self-damaging. Each of his stolen Quirks have their own limitations and weaknesses. | Same as before, minus blindness and injuries.

All For One: All For One's Quirk allows him to instantly steal people's Quirks and renders them the user's own. This Quirk can also transfer and grant Quirks (stolen by All For One) to other people, he can even combine his stolen Quirks to create powerful and devastating attacks. The theft is permanent, and it cannot be returned without his consent. All For One has stolen a variety of Quirks with his ability:

Toichiro Suzuki (Mob Psycho 100) Toichiro's Profile (Weakened All For One and <20% Toichiro were used. Speed was Equalized)