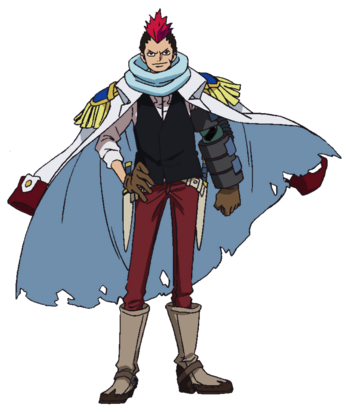 All-Hunt Grount is a Marine Captain and a major antagonist for the Marines Rookie filler arc. He was a subordinate to Admiral Aokiji. He was transferred to Vice Admiral Prodi's base, which is close to Big Mom's territory.

Attack Potency: Likely Large Mountain level (Was able to contend with Dressrosa Luffy while he's in Gear 3rd, with his arm in full-power)

Intelligence: Combat genius, learned how to maintain his left-arm.

Retrieved from "https://vsbattles.fandom.com/wiki/All-Hunt_Grount?oldid=5024863"
Community content is available under CC-BY-SA unless otherwise noted.