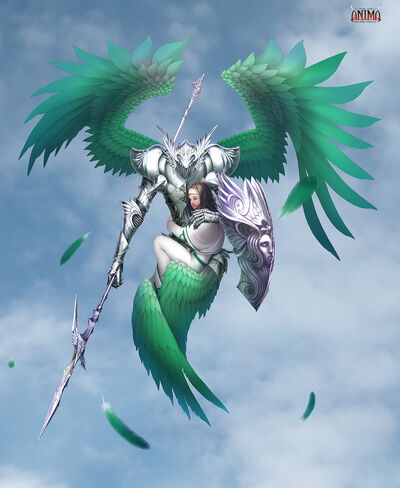 Tier: 8-B, higher with weapons. At least High 7-C with Sacra Spectrum

Attack Potency: City Block level (Stronger than an Ice Maiden), higher with weapons. At least Large Town level+ with Sacra Spectrum (Grants a bonus of +40 to attack ability [+240], making it superior to a Chthon)

Speed: Superhuman (16.66 m/s) with at least Transonic combat speed and reflexes. Far higher with Sacra Spectrum (Grants a bonus of +40 to attack ability)

Standard Equipment: The Alius wield both a spear (although it can be any other melee weapon such a sword, axe or mace) and shield made of a sacred metal bounded to the Alius body and soul that no one else can use

Weaknesses: If a Holy Soldier commits a single wrong act, even against its will or made by accident, its essence is consumed at once and it dies

Retrieved from "https://vsbattles.fandom.com/wiki/Alius?oldid=4852764"
Community content is available under CC-BY-SA unless otherwise noted.