Alita, known in Japan as Gally (ガリィ Garī) and originally named Yoko (陽子 Yōko), is the titular protagonist of Battle Angel Alita and its sequel, Battle Angel Alita: Last Order. She is known for her prowess as a practitioner of the powerful cyborgmartial art Panzer Kunst. Alita's background and history were briefly hinted at in Battle Angel Alita, but were not fully explored until Last Order, which reveals that Alita was highly instrumental in creating the world within which the series is set.

Alita takes on a variety of roles throughout the series, starting out as a hunter-warrior. She later became a motorball player and ultimately the champion after defeating Jashugan. Two years later, after saving the Scrapyard from Zapan and about to be executed, she was recruited by the Tipharean Ground Investigation Bureauto be an elite member of the TUNED, unknowingly serving as the basis for the development for a dozen combat androids known as the TUNED AR Series 2.

Powers and Abilities: Superhuman Physical Characteristics, Very Skilled Martial Artist (uses a style known as Panzer Kunst, which also ignores regular durability to some extent), Decent Swordswoman, Plasma Manipulation, through the use of electromagnetic manipulation Alita can heighten her attack and movement speed as well as control and speed up both her internal plasma and external sources of heat, by utilizing her fight chi Alita gains precognitive like abilities in which she can read the opponent's actions the instant before they happen as well as concentrate all of her mental and physical strength to one point (similar to concentrating the sun’s rays by using a magnifying glass to one point), sound manipulation, Immortality (Type 1), able to use sonar, electromagnetic senses, echolocation

Speed: Hypersonic (Was able to dodge grind cutters which move at 3-4 times the speed of sound effortlessly) | At least Subsonic, likely higher (Cameras were needed during the course of the tournament to keep up with her movements) | Supersonic+ movement and attack speed (Is able to casually react to and dodge bullets from close range, was also able to attack at supersonic speeds)

Stamina: High, capable of fighting for long periods of time.

Standard Equipment: With her TUNED body Alita has a variety of effective support weapons such as: TUNED Pistol (a handgun that fires armor-piercing HE rounds. It has two firing modes: single shot and three-round burst. It's Alita's sidearm), TUNED Heavy Rifle (a powerful rifle/cannon that can be used as an assault rifle or a sniper rifle), throwing, combat, close quarter combat and survival Knives, Fragmentation, Smoke, Flash bangs, Incendiary, and EMP Grenades, Mobile unit (a single-wheeled motorcycle used by TUNED agents as a transport vehicle. It can be controlled manually by the agent or by remote control by Tiphares. The operator's voice can be projected from the mobile unit), Arachno (a mobile spider based grenade, arachnos have the ability to extend a silk tripwire from their abdomens. This allows the creation of easily set-up, quick-moving traps), Missile Bee (a bee-shaped homing missile that has its own target selection system), Lice probes (a miniature machine that scans the ground for traps. Traps can then be marked on Alita’s vision), Firefly (Enkera) (the firefly is a small flying insectoid robot which detonates into a five-second spherical plasma burst. Its applications include tunnel digging and close combat utility), Laser bug , Support System Gabriel, Solenoid Quench Gun (a high powered electromagnetic gun that floats to minimize recoil. Receives a power charge directly from Gabriel and fires a solenoid slug at 5 km/s, or roughly mach 14), Mono-molecular wire (a wire that is only a few atoms wide, leading to a finer edge than any existing knife. It also has a tensile strength of 2.4 tons, and since it's basically one long molecule, is almost completely invisible to the naked eye)

Weaknesses: Her Hertza Haeon can be nullified with a vibration of the same wavelength. 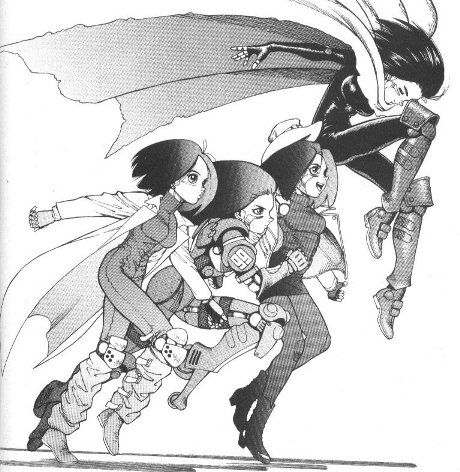 Retrieved from "https://vsbattles.fandom.com/wiki/Alita_(Pre-Last_order)?oldid=6600465"
Community content is available under CC-BY-SA unless otherwise noted.