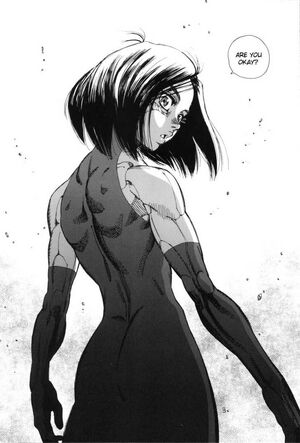 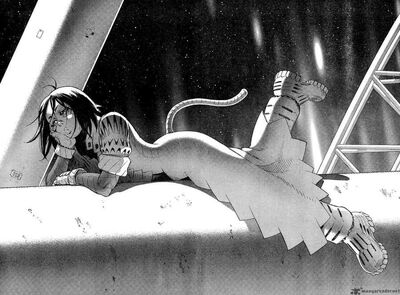 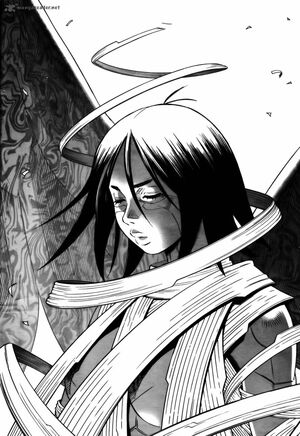 Alita, known in Japan as Gally (ガリィ Garī) and originally named Yoko (陽子Yōko), is the protagonist and title character of Battle Angel Alita and its sequel, Battle Angel Alita: Last Order. She is known for her prowess as a practitioner of the powerful cyborg martial art Panzer Kunst. Alita's background and history were briefly hinted at in Battle Angel Alita, but were not fully explored until Last Order, which reveals that Alita was highly instrumental in creating the world within which the series is set.

In Last Order she spearheaded a team called the Space Angels which includes three of her replicas that competed in the LADDER-sponsored Tenth Zenith of Things Tournament.

Powers and Abilities: Superhuman Physical Characteristics, Masterful in Panzer Kunst (Which can also ignore durability in certain ways), Plasma Manipulation, Energy Manipulation, Electromagnetism Manipulation, Regeneration (Imaginos 1 doesn't have regeneration, Imaginos 2 has High-Mid She was blown to bits a while before this happened and she regenerated using her own conciousness, Low-Godly with imaginos 2.1 She regenerated from energy), Immortality (Types 1 and 3), Shapeshifting (She is said to be able to limitlessly manipulate atoms in her body), Sound Manipulation, Nanotechnology, Hacking

Attack Potency: City Block level (Should be stronger than her Berserker Body, since the Imaginos body was based on it but made better) | At least City level, possibly Mountain level (Comparable to Super Fizziroy Sechs who can do this) | At least Island level (as seen here) | Solar System level (Helped Tunpò by giving him access to her power source, thus allowing him to make a mini black hole with about 80 percent the mass of the sun)

Speed: At least Hypersonic+ | Unknown, possibly Relativistic+ (Comparable to sechs at this stage of the story) | At least Relativistic+, likely FTL (Much swifter than Sechs) | Unknown when tapping greatly into power source

Striking Strength: City Block Class | At least City Class, possibly Mountain Class | At least Island Class, (Should technically be able to put in all of the energy she draws into her plasma and her strikes) | Unknown

Durability: City Block level (She stated that she was stronger than before and Nova has confirmed it) | At least City level, possibly Mountain level | At least Island level (Low-Godly regeneration makes her hard to kill) | Unknown

Range: At least Hundreds of meters, but she can link as far as Jupiter.

Standard Equipment: Her body which can produce blades and act as an inventory of destructive techniques, also carries a mechanical living gun named Danko

Weaknesses: Her Hertza Haeon can be easily nullified with a vibration of the same wavelength

Retrieved from "https://vsbattles.fandom.com/wiki/Alita_(Last_Order)?oldid=6633213"
Community content is available under CC-BY-SA unless otherwise noted.