VS Battles Wiki
Register
Don't have an account?
Sign In
Advertisement
in: Tier 9, Tier 9-A, Tier 8,
and 32 more 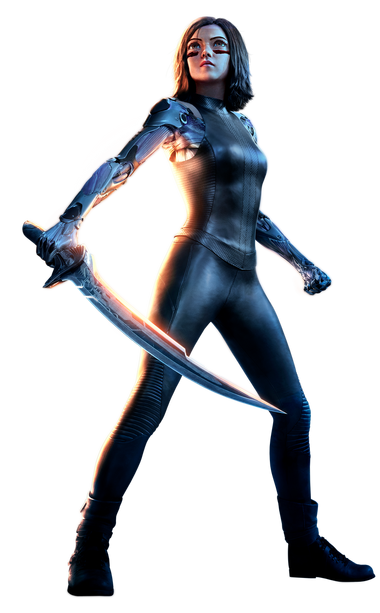 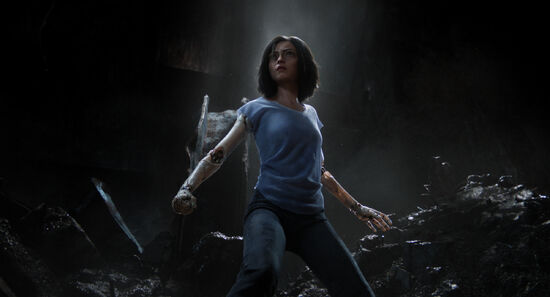 Alita is a cyborg Hunter Warrior who was rebuilt by Dyson Ido after being found in a scrapyard. She serves as the protagonist and titular character of the film. Rebuilt without memories of her previous life, Alita has flashbacks of her past when she instinctively enters combat using the forgotten art of Panzer Kunst and realises she is destined to confront the mysterious Nova in the sky city of Zalem. She also falls in love with Hugo who also dreams of reaching Zalem but is left heartbroken when she is unable to save him from falling to his death whilst trying to get there.

Alita is named after Ido and Chiren's deceased daughter and grows to think of Ido as her father.

Same as before but to a much greater extent, Regeneration (Mid-Low, her Berserker body perfectly repaired itself in seconds after Grewishka pierced it), Energy Manipulation (Can generate and control plasma and can use it to empower her attacks and weapons), Fire Manipulation (Can generate fiery blue plasma thanks to her berserker body), Limited Matter Manipulation and Shapeshifting (Her Berserker body includes nanites, enabling it to change shape and alter its form), Body Control (Her Berserker body allows her to contort herself into positions that can only be matched by natural born contortionists and has physical strength that far surpasses that of any human contortionist as she can hold her entire body up on one finger with ease)

Attack Potency: At least Small Building level (Cleaved off Grewishka's arm with a single kick during their first encounter, the latter being able to lift a full-grown man in excellent physical condition like Ido with one hand with extreme ease and Alita was superior to him. Beheaded Nyssiana by kicking her headfirst into a wall so hard that her head got stuck there. Easily defeated Zapan and managed to harm Grewhiska after he was upgraded) | Building level (Vastly superior to her previous body. Easily overpowered and killed multiple Hunter-Warriors who tried to kill her at the Motorball Circuit. Destroyed the Centurions with ease when she attacked the Factory. Very easily defeated Grewishka during their final confrontation and didn't view him as a threat)

Speed: Superhuman (Can instinctively respond to danger with incredible speed and precision and has enough self-control to stop a punch mere millimetres from a mirror) | Subsonic (Much faster than her previous body, to the point she lazily sliced through everything Grewishka threw at her before cutting him in half without needing real effort during their third battle. Was able to slice a teardrop in half before it hits the floor)

Lifting Strength: At least Peak Human | Superhuman (Stronger than her previous body. Lifted and moved one of the Centurions's canon with one arm without difficulties)

Striking Strength: At least Small Building Class (Stronger than powerful cyborgs like Zapan whom she projected on several meters with a kick. Even without any other limbs, she had enough strength to destroy Grewishka's right eye after he was upgraded with only one harm) | Building Class (Vastly superior to her original body. Vertically bisected Grewishka without any effort during their final confrontation)

Durability: At least Small Building level (Easily endured strikes from Nyssania and survived to Grewhiska's attacks) | Building level (Was more surprised than harmed by Grewishka's surprised attack and recovered almost immediately from it without any lasting damage)

Intelligence: Gifted. Is an extremely skilled warrior and a fast-learner who can adapt to most situations quickly.

Weaknesses: While powerful, her original body isn't designed to be pushed to the extremes she pushes it to, leading to her defeat against Grewishka. | Is somehow naive and has lost the memories of her previous life. Can be overconfident in her abilities (although this doesn't really cause her much harm) and is naturally drawn to violence and fighting due to her programming, otherwise none notable.