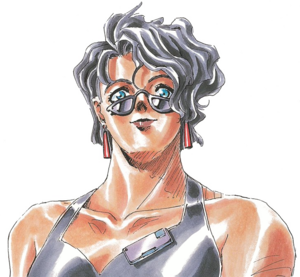 Alissa Cyan is the general of the New World Empire. She is confronted by Sketch Turner in the command center when he lands in front of her. Alissa believes Sketch is the "Chosen One" and sends him on his mission against alien forces.

Tier: 9-C physically, 9-B with weaponry

Speed: Athletic Human (Faster than most people and slower mutants), Speed of Light attack speed with her laser pistol

Stamina: Moderately High (Can fight off a horde with her squad)

Range: Standard melee range to hundreds of meters with weaponry

Standard Equipment: A laser pistol and a walkie talkie used for communication with Sketch

Intelligence: At least Gifted (Is a skilled military general with years of experience and a combat/strategy expert; has the ability to defuse advanced NU-K warheads)

Retrieved from "https://vsbattles.fandom.com/wiki/Alissa_Cyan?oldid=6979541"
Community content is available under CC-BY-SA unless otherwise noted.