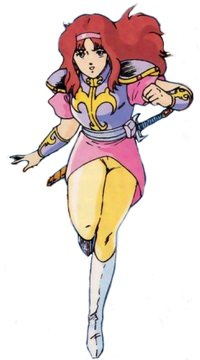 Alis Landale was the main protagonist of the 1987 Sega RPG Phantasy Star.

Attack Potency: Solar System level (Defeated Darkforce, who was created with the purpose of destroying the Algo star system)

Speed: Sub-Relativistic (Defeated Lashiec, who would later go on to fight Chaz Ashley. Whether or not Lashiec got significantly faster since then is unknown, however)

Retrieved from "https://vsbattles.fandom.com/wiki/Alis_Landale?oldid=6960666"
Community content is available under CC-BY-SA unless otherwise noted.