VS Battles Wiki
Register
Don't have an account?
Sign In
Advertisement
in: Rise of Legends, Characters, Male Characters,
and 17 more 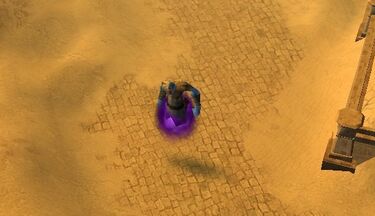 There are 8 Alin Genies across the campaign of Rise of Legends, all with the same sprites and abilities, all related to summoning.

Marwan is the strongest lesser Genie created by Sawu. He does his master’s bidding without question. He is an extremely strong user of glass magic and can easily summon armies of Dark Glass creatures. He is a recurring enemy in the campaign, even faking his appearance to trick Giacomo. Enemy.

Mendes, Buto and Baharya are three perfectly identical Genies created by Sawu. They usually carry various missions in the likes of corrupting powerful beings (like in their attempt to corrupt Damanhur) and exploring ruins to acquire their hidden power. Enemies.

Memphis, Kharga and Theben are three perfectly identical Genies created by Sawu. They usually serve as army leaders and deal with expanding the territory of the Dark Alin. Enemies.

Avaris is a Genie not created by Sawu. He likely possesses vast knowledge. He was captured by The Doge and imprisoned in the prison of Dirsi. Ally.

Tier: Likely 9-B with attacks and Dark Walkers, 9-B to 9-A with most summons, At least High 8-C with Glass Cannons ans Golems, At least 7-B with Glass Dragon | Weaker regular attacks, Same for the summons | Same | Weaker

Speed: Subsonic attack speed with regular attacks and powers, Superhuman movement speed (comparable to Sawu). Reaction/Combat speed is hard to determine due to game mechanics, but likely Subsonic | Slightly Faster | Same as Sawu | Faster than all others

Weaknesses: None outside of game mechanics