VS Battles Wiki
Register
Don't have an account?
Sign In
Advertisement
in: Tier 5, Tier Low 5-B, Characters,
and 21 more 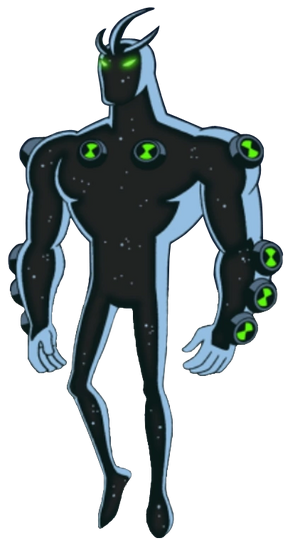 Alien X is the Omnitrix's DNA sample of a Celestialsapien from the Forge of Creation. He is the final villain in the Ben 10 Reboot movie special titled Alien X-Tinction.

Attack Potency: At least Small Planet level (Casually defeated several aliens including Heatblast, Cannonbolt, Rath and Big Chill, and should be at least as powerful as Alien V, who can terraform the Earth), likely far higher

Stamina: Extremely High (He was able to easily harm and keep up with Ben Prime's Heatblast, Alternate timeline Ben's Bloxx, Chromastone, Big Chill, Ampfibian and alternate Gwen's Ripjaws all at once)

Range: Several meters to Tens of meters with energy projection

Notable Attacks/Techniques: As a Celestialsapien, Alien X is the most powerful alien that Ben Tennyson has encountered, and he has displayed several abilities. The most notable used by him throughout the battle are the following:

Note: As a pure Celestialsapien, he should be more powerful than Alien V used by Vilgax, who has the potential to take over the universe, and the likes of High Override, who is a planetary threat

Naruto Uzumaki (New Era) (Naruto) Naruto's Profile (Both were Low 5-B, New Era Naruto was used, speed was equalized and the battle took place on the Moon)