VS Battles Wiki
Register
Don't have an account?
Sign In
Advertisement
in: Tier 3, Tier 3-A, Characters,
and 31 more 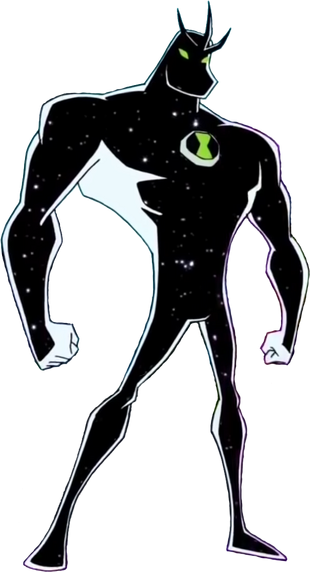 Alien X is the Omnitrix's DNA sample of a Celestialsapien from the Forge of Creation.

Age: Inapplicable (Was born in a realm that is out of sync with time, existed prior to Ben gaining the Omnitrix)

Speed: Massively FTL+ (Comparable to other Celestialsapiens, who easily cross interplanetary distances and can quickly grow to be as large as entire galaxies), Massively FTL+ attack speed (Able to move numerous galaxies across the Universe in seconds)

Striking Strength: Universal (Traded blows with Galactic Gladiator, who insisted to use physical attacks against Alien X despite having his same abilities)

Durability: Universe level (Took hits from Galactic Gladiator, another Celestialsapien who should not be much weaker than Alien X himself, and neither could one-shot the other)

Range: Multiversal (Comparable to other Celestialsapiens)

Weaknesses: Alien X needs to wait for his three personalities to make a decision before he can do anything, though this weakness disappeared in Omniverse. Other members of his species will punish him if they go against the Multiverse Preservation Act. Susceptible to Energy and Life Absorption

Note 1: Alien X's mind, which exists in a hidden pocket dimension, includes Serena, Bellicus and Ben. Alien X was born in the Forge of Creation which exists beyond the Multiverse. Professor Paradox is not allowed to be within 500 light-years of a Celestialsapiens due to a treaty settled between the two.

Note 2: Ben using Alien X's DNA to cut through the Contumelia's Extra-Dimensional Barrier is unquantifiable. While the Contumelia Ship was undamaged by the Annihilargh's Big Bang, it has been damaged by far less such as Grey Matter breaking one of it's metal pipes and the combined Time Cycles being able to break through it. On another note, the ship's weaponry is no more than a threat to Ben's regular Aliens.

Alien X tanking the destruction of the entire Universe

Alien X recreating the entire Universe with a thought