VS Battles Wiki
Register
Don't have an account?
Sign In
in: Flight Users, Danmaku Users, Earth Users,
and 9 more 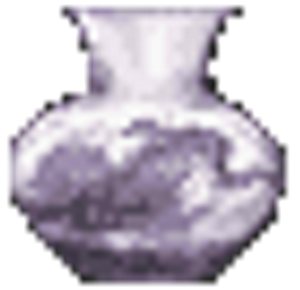 The Alien Vase is part of a boss minigame in WarioWare Inc. for the Gameboy Advance.

In this minigame, the vase fires onslaughts of asteroids and space debris to try and destroy earth. The player, assuming the role of a giant alien metallic floating head, must shoot lasers to try and stop it.

Powers and Abilities: Superhuman Physical Characteristics, Flight, Danmaku, Large Size (Type 4-5), Creation/Pocket Reality Manipulation (Can fire asteroids and space debris out of its opening, but whether or not this is done via pocket reality or creating them manually is unknown)

Attack Potency: At least Planet level (A single asteroid that comes out of it is capable of reducing earth in its entirety to nothing upon impact)

Speed: Likely Relativistic (Due to its sheer size. Also flew to the earth from way off in the background

Durability: At least Multi-Continent level (Should be similar to the moon in size, although it is hollow) Likely Planet level (Can withstand the player's laser for extended periods of time)

Range: Planetary (Can fire asteroids that can reach earth from far away)