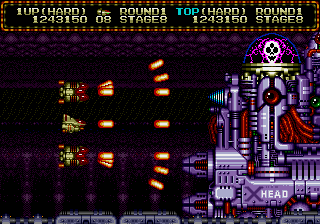 The Alien Train Tank is the final boss of the side-scrolling shoot 'em up game Zero Wing. It is the main battlestation of the Alien organization CATS and where its leader is present.

Pilots: Aliens of the CATS organization

Attack Potency: Multi-City Block level (Superior to all the other bosses. Can also fire and withstand its green orb explosion, which is that powerful)

Speed: FTL (Kept up with Trent ZIG battle vehicle, which can quickly travel from planet to planet)

Range: Hundreds of meters with projectiles.

Weaknesses: The red case on the back. 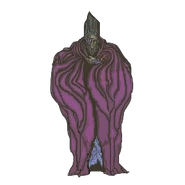 The leader of the organization.
Add a photo to this gallery

Retrieved from "https://vsbattles.fandom.com/wiki/Alien_Train_Tank?oldid=6962360"
Community content is available under CC-BY-SA unless otherwise noted.