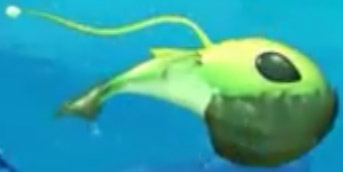 The Alien Intruder is the main antagonist of the Popcap Game, Feeding Frenzy 2: Shipwreck Showdown, the sequel to the original game, Feeding Frenzy. It was first encountered by Boris the Butterfly Fish and then later became a threat of Shady Shoals, destroying undersea labs in Sharktooth Ridge and as well as causing shipwrecks, changing the color of the fish, making them toxic and sick, and causing the marine life to go havoc, making them move far from their habitats. It was later fought by Goliath the Great White Shark, and defeated it by shrinking down to a small size. Then comes the sequence of the fish heroes to shrink and defeat the Alien Intruder until it has come up with a plan to release millions of microspores all over the world's oceans, becoming a world-wide threat. Eventually, it was defeated by Boris after he shrunk it down to a size small enough for him to eat.

Powers and Abilities: Superhuman Physical Characteristics, Large Size (Type 1), Forcefield Creation (Can create a shield that makes it invulnerable to explosives such as mines), can use its "Inhale Ability" to inhale various objects such as fish, Resistance to Poison (Recovered from jellyfish stings for a few seconds), possible Biological Manipulation (Can release millions of microspores that can infect the world's oceans), Light Manipulation (Can produce light from its tail to cover up to hundreds of meters)

Attack Potency: Wall level (Highest in the food chain of Feeding Frenzy, should be higher than the Shark King, Orville the Orca and Goliath the Great White Shark)

Durability: Wall level (Its shield makes it difficult to kill, and it wrecked the sea labs in Sharktooth Ridge without any injuries)

Stamina: Unknown, likely high (Can take on explosions from mines without leaving any injuries other than stunning itself)

Range: Tens of meters due to its size, likely higher with its Suck Ability, possibly up to hundreds of meters with its Light

Standard Equipment: Its shield and tail

Weaknesses: Its tail, when bitten, makes it vulnerable to explosions, stunning it for a few seconds, and deactivate its shield. Its Suck Ability can sometimes accidentally inhale mines. Should have standard weaknesses of aquatic animals.

Dash: Increases its speed for a very short amount of time

Shield: Produces a shield that protects it from physical harm such as explosions

Light: Produces light from its tail, allowing it to see in darkness

Retrieved from "https://vsbattles.fandom.com/wiki/Alien_Intruder?oldid=2862567"
Community content is available under CC-BY-SA unless otherwise noted.