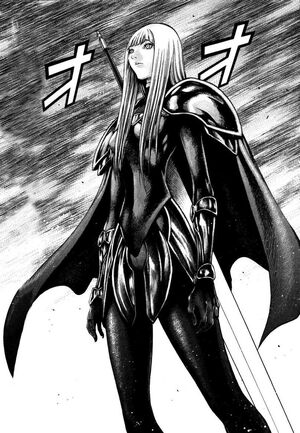 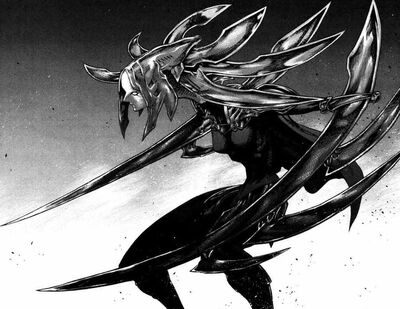 Classification: Human/Yoma Hybrid, Awakened Being, Former Claymore No. 1 of The Organization

Powers and Abilities: Superhuman Physical Characteristics, Excellent Swordsmanship, able to enhance her stats with Yoki, can sense Yoki, Regeneration (Low-Mid), Immortality (Type 1), Shapeshifting (Can transform into an awakened form where she gains bladed appendage equipped with smaller blades which vibrate at high-speeds), Soul Link (has a strong connection to her twin sister, Beth, who contains her soul when she awakens and can bring her back from her awakened state)

Attack Potency: Small Town level via power-scaling (powerful enough to be considered an Abyssal One, her awakened form is noted to possess excessive cutting power even by Riful's standards)

Speed: Massively Hypersonic+ (had enough speed to evade Riful's attacks and the The Destroyer's parasitic spines)

Range: Extended human melee range with sword, further when awakened (due to size)

Weaknesses: Lacks a "sense of self" and independent thought to a great extent, needs Beth to keep a psychic leash on her when she awakens or else she'll go berserk and kill everything

Yoki (Demon Energy): The energy of a yoma. When a Claymore is created she assimilates the yoma yoki. The claymores uses yoki to use special skills like increasing their strength and speed: the more yoki used, the bigger the boost, but the distortion induced by the yoki released is also increased proportionally. Moreover, the claymore also gradually loses her human self to the yoma within her the more yoki she uses; if they go beyond a certain point, they will 'awaken' and completely loose touch with their human self. Many Claymore also uses their yoki to make special moves.

Note: Not to be confused with the character of the same name from Bullet Witch