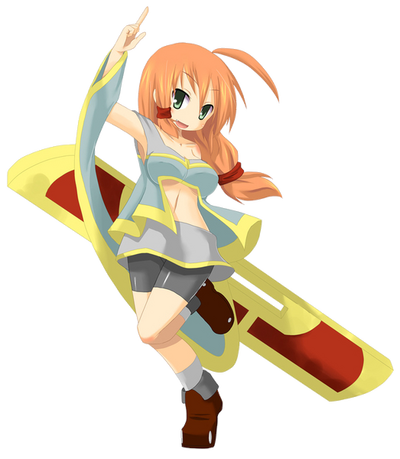 Alicephia is a playable character in Wonderful World. She is Adopted by the great thief that troubles the world. She was picked up where she was abandoned at the roadside when Alicephia was a baby, and then she lives as a member of the world's Thieves known as the Finkley family. She is the red ripe among miserable men, and it is being tolerated from my colleagues. She trusts her friends and is tied by a solid bond, but her character is very bad for others and she is constantly looking down. It is selfish, such as going rampant immediately if it does not get it as desired, he swears a lot. Despite the power of the magic tool, she is the only person who can freely fly independently to any mind. Battle capability is low, but with the mobility she will trick her opponent, not surprisingly caught. She mainly aims at the treasures of ruins and treasures of rich houses. She likes thrilling things, she wants to capture as much as it is said to be dangerous. By stealing "Devil of Pupa" from Makai, it was decided to target life from the demon.

Range: Average Range (Would rather get up close and personal.).

Intelligence: High (Has risen through the ranks of the Finkley family, and is now a full versed Thief.)

Weaknesses: Is more of an aerial fighter than anything, & she is somewhat of an Airhead.

Feats: Has prevented the birth of a potentially God-Like Demon by ripping its Pupa out, Alicephia's first venture into a ruin didn't include a Windboard in her arsenal; & she survived. She is among the elite of the Finkley name; though only because the men were failing at their job, She even encounters Orphe, who the two make deals that satisfy both sides.

Retrieved from "https://vsbattles.fandom.com/wiki/Alicephia_(Wonderful_World)?oldid=4106266"
Community content is available under CC-BY-SA unless otherwise noted.