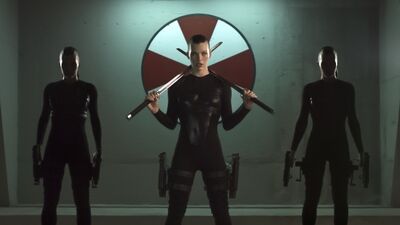 The Alice clones are perfect clones of the original Alice. They were created for several purposes, with some being test subjects for Umbrella Prime and others retaining all of the original's physical and psionic abilities. These clones were specifically created to derive a strain of the T-virus to reverse the ravenous effects of the original virus in the undead population by increasing their intelligence.

Superhuman Strength, Speed, Durability, Resilience, Agility and Reflexes, Acrobatics, Martial Arts, Vehicular Mastery, Weapon Mastery with superb precision and accuracy, Enhanced Hearing, Infiltration, Expert use in explosives, Infection Empowerment, Accelerated Healing and Recovery, Can sense the infected and enhanced hearing, telekinetic abilities, Durability Negation, limited Technology Manipulation (can interface with technology), Resistance to electrical currents and tech-based Mind Control, Shockwave Generation, Have a psychic link with her clones (which can also enable her to progressively learn from them), Can kill by thinking

Attack Potency: Small Building level (One of them have destroyed an entire room with a shockwave blast), can bypass conventional durability with psionics | Human level

Weaknesses: Possibly Anti-virus, it has been noted in a deleted scene the intelligence in the clones deteriorates as they go on | Normal human weaknesses

Suburbia clone
Add a photo to this gallery

Retrieved from "https://vsbattles.fandom.com/wiki/Alice_clones?oldid=5774081"
Community content is available under CC-BY-SA unless otherwise noted.