Alice is the 2nd Ranked Assassin of No More Heroes: Desperate Struggle. Although she is an extremely deadly and experienced combatant, she is incredibly cordial towards Travis and admits that she would like nothing more than to escape the "endless cycle of violence" perpetuated by her line of work, admiring him as the "Crownless King" who managed to walk away even after achieving Rank 1.

Powers and Abilities: Superhuman Physical Characteristics, Expert Beam Katana Wielder (Can use her weapon with ease) and Energy Projection

Attack Potency: Small Town level (As the 2nd Ranked Assassin, she is the second most dangerous combatant in the UAA and posed a serious threat to Travis)

Speed: Sub-Relativistic (Just as fast as Travis, possibly even faster than him)

Durability: Small Town level (Can take most of Travis's Attacks)

Standard Equipment: Asura-6 (A back-mounted machine that can carry 6 beam katanas and also has a tail appendage that can lift herself up for long periods of time)

Intelligence: As the 2nd Ranked Assassin, Alice Twilight is one of the most dangerous combatants in the entire series, ranking above even Margaret Moonlight and Captain Vladimir, both of whom were able to give Travis an incredibly hard battle. Her Asura-6 allows her to wield six beam katanas at once with deadly efficiency, matching Travis blow for blow. She is also skilled enough to throw her beam katanas with deadly accuracy and overwhelming her foes with nothing but swift and fierce swordplay rather than any particular gimmicks.

Weaknesses: While she can use her Asura-6 to suspend herself in the air to grant her a better vantage point and higher ground, this limits her mobility. 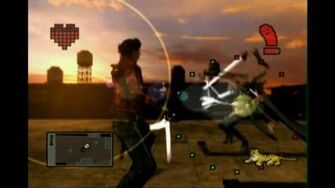 Retrieved from "https://vsbattles.fandom.com/wiki/Alice_Twilight?oldid=6976792"
Community content is available under CC-BY-SA unless otherwise noted.