VS Battles Wiki
Register
Don't have an account?
Sign In
Advertisement
in: Tier 9, Tier 9-B, Tier 2,
and 58 more 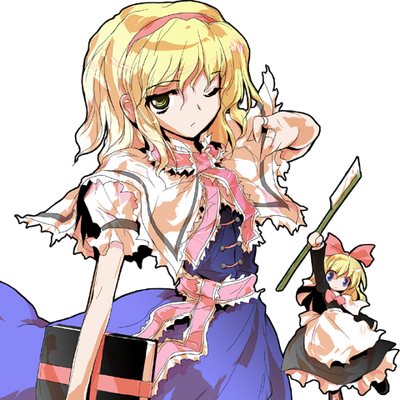 Alice Margatroid is one of only a few people known to live within the Forest of Magic. She's a magician known primarily for her skilful use of dolls as well as being a loner. She gets in many fights with Marisa, but they are somewhat acquaintances, sharing many of the same interests and even teaming up at times.

Superhuman Physical Characteristics, Enhanced Senses (Can recognize non-humans and see through illusions. Youkai can see better than humans in the dark of night[1]), Flight, Magic, Extrasensory Perception (Magic users are sensitive to changes in temperament[2]), Acausality (Type 1; Unaffected by Keine erasing the human village from history[3], despite the fact that youkai rely on the continued existence of the human village in order to sustain their own existence[4]), Danmaku, Spirit Manipulation, Limited Creation & Conceptual Manipulation (Type 1; The process of creating a spell card requires giving it a 'name' to define its form and power, not unlike how the gods gave 'names' to everything at the beginning of reality to give them form from nothingness, albeit on a much smaller scale[5][6][7]), Power Modification (Spell card users are capable of changing the traits of any attack or ability by naming it, being able to turn ordinarily lethal attacks into nonlethal ones, or severely restricting the potency of an ability by 'gameifying' it[8][9]), Acrobatics, Empowerment (Under a full moon), Body Puppetry, Thread Manipulation, Light Manipulation, Darkness Manipulation, Curse Manipulation, Forcefield Creation, Summoning, Non-Physical Interaction (Can harm Phantoms and Evil Spirits with her regular attacks), Space-Time Manipulation (Caused the eternal night in the Magic Team Scenario of Imperishable Night), Fire Manipulation, Ice Manipulation (Capable of using fire and ice magic), Breaking the Fourth Wall (Informs Marisa that Parsee is the stage 2 boss of Subterranean Animism), Invisibility (Can make her dolls invisible by hiding them), Explosion Manipulation (Can make her dolls explode), Vibration Manipulation (All characters in Immaterial and Missing Power are capable of generating shockwaves to push their opponent back), Limited Pain Manipulation (Fujiwara no Mokou, who has adapted to living her life in constant agony[10], had to give up while fighting her due to the pain caused by her attacks[11]), Longevity (Youkai lifespans are longer than that of humans[12], and half youkai such as Rinnosuke seemingly do not age at all[13]), Self-Sustenance (Types 2 & 3; Magicians do not need to eat or sleep, though they can do so if they choose), Stealth Mastery (Magicians can steal children and livestock undetected[14]), Minor Telekinesis (Magicians are capable of performing sleight of hand magic[15]), Preparation (A magician can take on any kind if youkai, so long as they have sufficient time to prepare[16]), Age Manipulation (Magicians can restore youth with their magic[17]), Shapeshifting (Upon entering Gensokyo, youkai gained the ability to change their form as they please[18][19], often choosing to take forms more closely resembling that of humans[20][21]), Intangibility (Youkai can break themselves down into[22][23], or regenerate from[24][25][26][27], a sort of black mist. They are also repeatedly shown to form from this mist out of thin air), Incorporeality (Youkai are stated to be unbound from the confines of the material world[28], and are made of Spirit[29]), Regeneration (Mid-Godly; Youkai are able to recover from bodily destruction, despite being made of Spirit[30][31]. They can also quickly recover from their Spirit being drained or destroyed), Aura, Sense Manipulation, Fear Manipulation (All youkai possess 'youkai energy' that takes the form of an aura[32]. This aura can make one feel pins and needles throughout their body[33], can make one start to tremble[34], and is powerful enough to deliver these effects even while sealed away[35]. Successfully inducing fear in a target also allows a youkai to absorb their Spirit[36]), Aura Suppression (Youkai commonly infiltrate the human village without their auras affecting nearby people[37], and are[38] shown[39][40][41] to be able to[42] mask their auras from[43][44] Kosuzu, who can naturally detect such auras[45]), possibly Soul Manipulation, Mind Manipulation, and Empathic Manipulation (It's been stated that most youkai can control the world through the mental layer of reality[46], which moves alongside the spirit and determines the emotions of all living beings. However, it is impossible to know specifically which youkai this applies to)

Resistance to Madness Manipulation (Youkai can resist the effects of the true Moon, which can drive humans insane and kill them if they look at it), Illusion Creation (According to ZUN, youkai are able to see illusions.[47] During the events of Imperishable Night, all youkai noticed the moon was illusory[48]), Biological Manipulation (Youkai lack DNA[49] and brains[50]), Matter Manipulation (Youkai are described as a fluctuation and seem to be composed of different particles[51] ), Disease Manipulation (As youkai are beings comprised mostly of spirit, they are unaffected by physical illnesses[52]), Subjective Reality, Transmutation (Youkai were once bound to the imagination of humans, with the myths and stories about them defining their forms and characteristics. However, after moving to Gensokyo, youkai were unbound from this system, and became capable of changing on their own[53]), Power Bestowal, Corruption (Youkai are unaffected by the Hourai elixir, which grants immortality and taints the drinker with impurity[54][55][56]), Fear Manipulation, Sense Manipulation (Youkai are unaffected by the passive auras of other youkai), Extreme Heat (Youkai are not affected by heatstroke[57]), Space-Time Manipulation (Unaffected by the effects of Keine's spell card Reincarnation "Ichijou Returning Bridge", which is stated to reverse time[58]), Time Stop (Can move inside Eientei unrestricted despite it having a frozen flow of time), Mind Manipulation, Empathic Manipulation (Unaffected by being near phantoms, which can passively change the emotions or slowly destroy the minds of anybody they come near[59]), Poison Manipulation, Perception Manipulation, Transformation (Can withstand the effects of the Forest of Magic, which is filled with poisonous spores in the air, contains mushrooms that induce hallucinations in anyone who stands near them, and has the power to change the nature of anything inside it[60][61]), Death Manipulation (Can survive being near Yuyuko, whose mere touch can cause death and who passively causes all living things near her to die[62][63]), and Soul Absorption (Survived Tenshi absorbing the souls of all living things across Gensokyo and various Otherworlds such as the Netherworld), Unconventional Resistance to Necromancy (Youkai do not leave corpses behind when beaten[64])

Attack Potency: At least Wall level physically (Due to long time use of magic her body is extremely weak and frail, with Alice being one of the main examples shown in Wild and Hornet Hermit chapter 3. Should still be stronger than fairies such as Cirno), Universe level+, likely Low Multiverse level with magic (Should be comparable to Marisa as a rival in magic. Claims to be superior to Reimu. She, alongside Marisa in the Magic Team's extra scenario Imperishable Night, inflicted so much pain onto Mokou with her magic attacks to where she couldn't fight anymore despite her immortality. Both she and Marisa were stated to be on a similar level to members of the Lunar Capital by Kaguya[65]), higher with preparation | Multi-Solar System level, likely Galaxy level (Fought Reimu and Marisa)

Speed: Infinite (Comparable to Marisa. Flew to the end of of Kaguya's corridor[66], which is composed of infinitely-linked pieces of the space-time continuum and is repeatedly stated to be infinite and endless[67][68][69][70][71]) | Speed of Light reactions, possibly Massively FTL+ (Comparable to Reimu and Marisa)

Range: At least Tens of Meters with Danmaku (Her firing range should be comparable to Sakuya's, who can throw knives at least 36 meters)

Weaknesses: The more dolls Alice fields, the more difficulty she has dodging. She is also vulnerable to spiritual attacks.

Note: ZUN stated that Alice Margatroid is the same Alice from the PC-98 era. She is the only character who was "confirmed" to be the same character from older games.

Alice in Immaterial and Missing Power

Alice in Who's Who of Humans and Youkai - Everlasting Edition