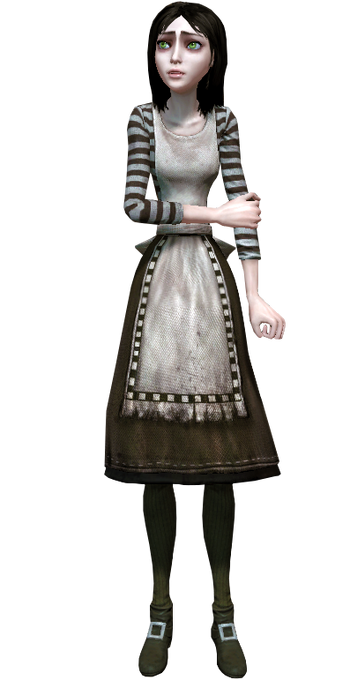 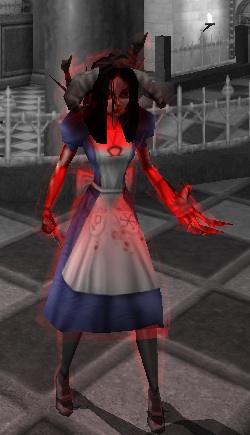 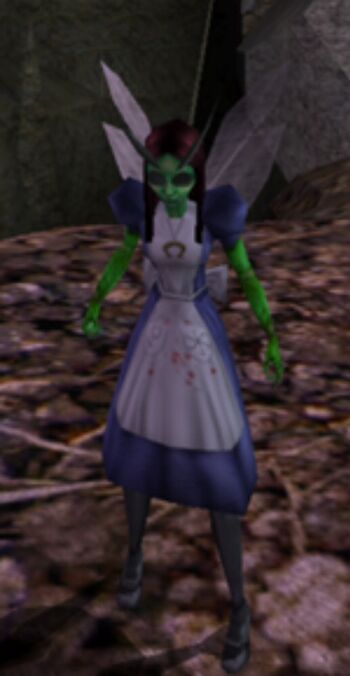 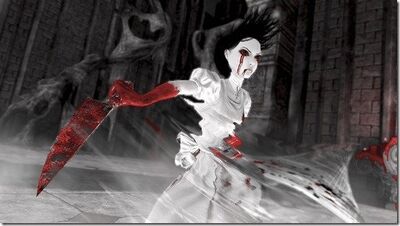 Alice Liddell is the main character of American McGee's Alice. As a child, Alice's house was burnt down and her parents were killed. After a failed suicide attempt, Alice goes into an Angst Coma and winds up in Rutledge Asylum for ten years without any sign of recovery. After a nurse reunites her with her beloved toy rabbit, Alice was dragged down the rabbit hole into Wonderland and discovers her dreamland has become a combined dark world/horrible world. Wielding the Vorpal Blade, Alice goes on an almost ax-crazy roaring rampage of revenge to save Wonderland from the Queen of Hearts and save her own sanity in the process.

In Madness Returns, Alice has left Rutledge Asylum after defeating the Queen of Hearts. Now living in London under the care of a psychiatrist, Alice still has problems with reality and learns Wonderland has been warped again by her insanity.

Lifting Strength: Unknown | At least Peak Human (Can wield very large weapons such as the Hobby Horse), likely much higher. Unknown with Eat Me cake.

Durability: Athletic Human | At least Wall Level, possibly higher (Can withstand being doused in molten metal and explosions, withstood breaking through a brick wall and the fall to Wonderland). Likely Building Level with Eat Me cake.

Standard Equipment: None notable | Vorpal Blade, Hobby Horse (large hammer-like weapon), Teapot Cannon (fires grenades of boiling tea), Umbrella (can be used as a shield), Pepper Grinder (similar fashion to a gatling gun), Blunderbuss, Clockwork Bomb, Jackbomb, Jabberwock's Eye Staff (can shoot laserbeams (when the laserbeam ends, an explosive fireball is also shot) and it blasts rocket-like orbs into the air that come crashing and exploding on opponents in a beautiful hazy purple mist), Demon Dice (summon demons to kill enemies, but they may attack Alice), Deadtime Watch (allows the ability to time stop for short period), Croquet Mallet (creates a electric aftershock when it makes contact with an enemy and can launch an electrified croquet ball, which moves and bounces at a high velocity and also provides an electric aftershock to whomever it makes contact with), Jacks (throwing weapon, when thrown they bounce against the opponents, cutting them in the process), Playing Cards (homing throwing weapon), Ice Wand and etc.

Intelligence: A combat genius, and clever, intelligent and quick-witted, good at solving puzzles

Weaknesses: Her mind is unstable, she is constantly haunted by the fact that she survived the fire that killed her family.